O’Dea says punishments must be the same across all government parties.

FIANNA FÁIL DEPUTY Willie O’Dea has said the two Green TDs who didn’t vote with the government this week were given “light punishments” and that any future sanctions must be standardised across all three government parties.

On Thursday, Neasa Hourigan TD voted against the government while Joe O’Brien TD abstained. The Green Party issued a statement to say the pair have lost speaking rights for the next two months.

The suspension includes the Dáil’s recess so their speaking rights are only affected for two weeks of Dáil sittings.

Speaking on Newstalk’s On the Record with Gavan Reilly today, O’Dea described these punishments as “light” and added that he would face greater punishment if he did similar.

“It is not for me to be prescribing particular punishments for transgressions within other parties but I would say this, there are three parties making up the government. And there has to be equality of treatment in relation to the whip from here on in as anything other than that would definitely be unsustainable, ” he said.

O’Dea referred back to an incident 32 years ago when he opposed the decision of the Fianna Fail government to close Barringtons’ Hospital in Limerick.

O’Dea said he was “cast into the outer darkness” for opposing it and that if such a situation repeated itself it would be unfair if he faced a similar punishment when Green TDs did not.

If members of one particular group get very light punishment, as these two deputies are getting for disobeying the whip, and members of the other two groups are getting very heavy punishment. When I voted against the whip over Barringtons’ Hospital I was cast into the outer darkness, and had a job to regain the whip. I mean that is unsustainable. I mean that is clearly unfair and it’s unsustainable.

O’Dea said it would be unfair because the different TDs from the government may even be in the same constituency.

“If something of importance to the constituency comes up here, say the closure of a school or a hospital, am I supposed to vote that through in the teeth of total opposition from my constituents? Or otherwise suffer the punishment of being thrown out of the party, when my Green colleagues can vote against it and be the hero of the constituents? And the punishment is a simple tap on the shoulder,” he said.

Asked about his vote in favour of the government’s proposals to extend a pay increase to the third super junior minister, O’Dea said there have been a number of things he didn’t “particularly like” voting for but that he felt like he had to. 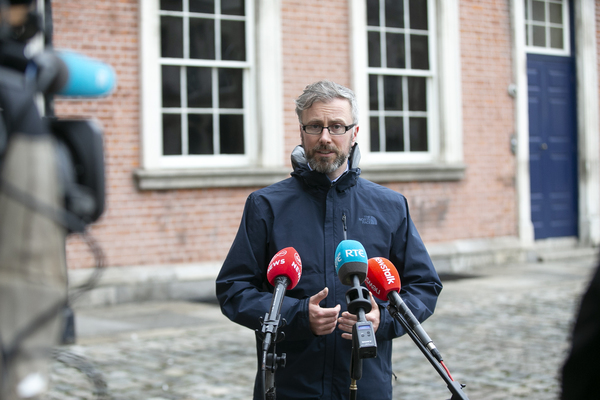 Speaking on the same programme, Green Party Children’s Minister Roderic O’Gorman said he has been assured that the two party members in question will not vote against the government again.

“We need a united government to deliver on the programme for government and that programme was ratified by our party members,” he said.

“Seventy six per cent in favour of it and there is a lot of really good things in it that our members support and I support, while there is stuff that Fianna Fail and Fine Gael members would find difficult,” he said.

“There is stuff that my party members and I find difficult, but our party membership gave us a mandate to enter that coalition government. We have to support the Programme for Government and that means supporting the legislation that is provided.”