Scott Fardy, Will Connors, Max Deegan, John Cooney and Stuart McCloskey were named in the XV.

THREE LEINSTER PLAYERS and two from Ulster feature in the Guinness Pro14 dream team for the 2019/20 season.

Leinster forwards Scott Fardy, Will Connors, and Max Deegan have been named in the selection, while Ulster backs John Cooney and Stuart McCloskey have also made the cut.

Members of the media in Scotland, Wales, Ireland, Italy and South Africa voted for the Pro14 dream team, which is made up of players who made a minimum of eight appearances during the campaign. 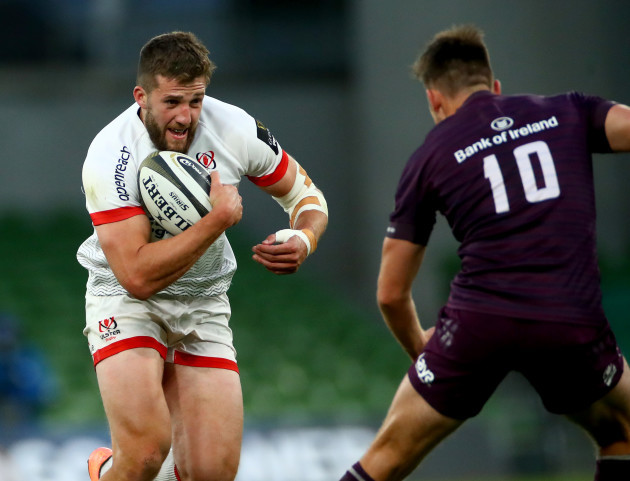 Stuart McCloskey has been a key man for Ulster.

Connors and Deegan had breakout seasons for Leinster that saw both called up to Andy Farrell’s Ireland squad as a result, with Deegan winning his first Test cap during this year’s Six Nations.

36-year-old Fardy has remained an influential and consistent performer for Leo Cullen’s side, who will defend their title in Saturday’s Pro14 final against Ulster.

Inside centre McCloskey has been a key man yet again for the northern province and his good form earned him a recall to the Ireland set-up, while Cooney’s sparkling form prior to lockdown saw him pushing Conor Murray hard for the number nine jersey at Test level.

Meanwhile, Leinster number eight Caelan Doris has been named the Pro14′s ‘Next-Gen Star’ for the 2019/20 season.

22-year-old Doris also enjoyed a real breakthrough campaign that led to him winning his first Ireland caps and he has established himself as a key man for Leinster.

His ongoing rise was recognised with the ‘Next-Gen Star’ award, which was also voted for by members of the media.