‘There is a lot of uncertainty’: Paschal Donohoe warns of Covid-19 impact on recovery, in his first meeting as Eurogroup head

Donohoe is in Berlin for his first meeting as President of the Eurogroup.

FINANCE MINISTER PASCHAL Donohoe has said he hopes Europe can avoid further lockdowns as part of its economic recovery but that Covid-19 will determine that.

Donohoe is in Berlin for his first meeting as President of the Eurogroup.

At a post-meeting press conference this morning, Donohoe said there is “a shared willingness” among Eurogroup members towards a co-ordinated approach on budgetary policy.

“There will be no sudden stop, no budgetary cliff-edge…We have confidence that we can build a strong and inclusive recovery,” he said. “Our society does need growth and it needs the right growth.”

Donohoe warned, however, that Europe’s economic recovery will not happen overnight .

We are all aware of the huge apprehension, the great concern that many millions of citizens face. And we accept that it will take time and it will take work to undo the damage that this crisis has caused.

He also said that further lockdowns could hamper the Eurozone’s recovery if Covid-19 cases continue to spike.

“We do, of course, acknowledge there is a lot of uncertainty about the economic outlook. We all hope to avoid some of the earlier lockdowns but, of course, Covid-19 continues to represent a clear and present challenge to our public health,” he said. 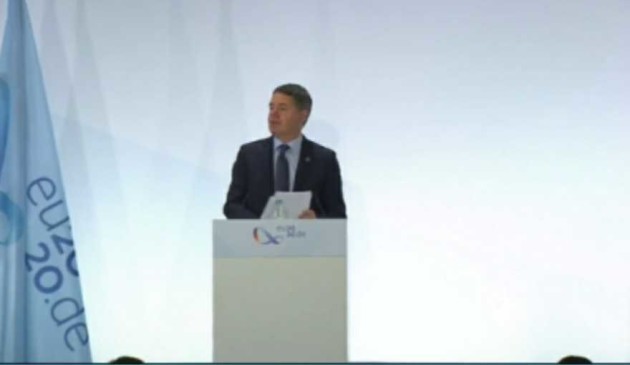 Donohoe addressing the media this morning.

European Commissioner for Economy Paolo Gentiloni, meanwhile, said that most EU countries won’t be back to pre-crisis GDP by end of next year.

“The road to recovery is paved with uncertainty,” he said.

Donohoe’s first meeting as head of the Eurogroup comes after Ireland officially fell into recession earlier this week.

The economy shrank by 6.1% between April and June as the impact of the coronavirus pandemic brought the largest quarterly drop on record.

The decline in economic activity in the second quarter surpassed the 4.7% reduction recorded in the fourth quarter of 2008 – at the height of the financial crisis.

Despite the unwanted record, the economic contraction experienced in Ireland was not as severe as that seen in many other countries in the developed world.

UK and US GDP fell by 20% and 12% respectively in the same three-month period, while the overall GDP of the Eurozone reduced by 12%.

The impact of the pandemic in Ireland was in part mitigated by strong performance in the export sector.

The annual GDP figure is down 3% compared to the same point last year.

In terms of the domestic economy, in quarter two modified domestic demand fell by over 15% year on year.

Donohoe said Covid-19 was having a severe economic impact on Ireland.

“Overall the numbers are broadly as expected based on dataflow on the second quarter released over the course of the summer,” he said.

They very much highlight the dual economic impact of the pandemic with net exports positively contributing to GDP in year-on-year terms on the back of robust growth in pharma exports, while the domestic economy suffered a severe hit.

“Despite the severity of the national lockdown, a large portion of manufacturers continued to trade and this is reflected in our export numbers.

“However many of our jobs-rich domestic sectors were temporarily closed giving rise to the large contraction in domestic demand seen today.”