Oregon fires force 500,000 to flee as death toll rises across western US

Some 14,000 firefighters are working along the West Coast.

HALF A MILLION people have been evacuated in Oregon, state officials said, as unprecedented wildfires rage along the US West Coast.

“Firefighters are prioritizing life safety as they battle a record 900,000 acres of wildfires across Oregon,” a statement said.

An estimated 500,000 Oregonians have been evacuated – over 10% of the state’s 4.2 million population – and that number continues to grow.

At least eight people have been confirmed dead in the past 24 hours across California, Oregon and Washington, but officials say some areas are still impossible to reach.

Hot and dry winds are fanning the flames which are feeding on drought-sapped vegetation, with California, Oregon and Washington worst affected. 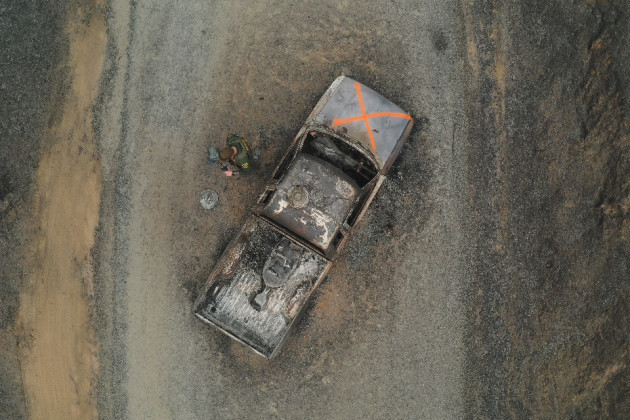 A Butte Sheriff officer checks on a vehicle that was burned in the Bear Fire near Lake Oroville in Northern California. Three people have now been found dead in the fast-moving Bear Fire, authorities said. 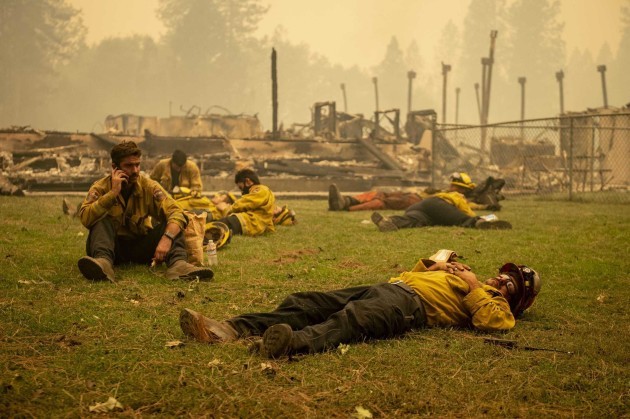 More than 14,000 firefighters are battling 28 fires across California, according to the Department of Fires and Forestry Protection.

In California, Butte County sheriff’s deputies and detectives found seven bodies yesterday, a day after three other victims were discovered.

Among those unaccounted for are Sandy Butler and her husband, who called their son to say they were going to try to escape the flames by finding shelter in a pond.

“We’re still hoping and praying for good news,” said Jessica Fallon, who has two children with the Butlers’ grandson and considers them her own grandparents.

“Everything is replaceable, but not my grandparents’ lives. I’d rather lose everything than those two. They kind of held the family together.”

More bodies could be found as crews manage to make their way into devastated areas.

The weeks-old fire was about 50% contained when winds thrashed it into explosive growth on Tuesday, driving it through rugged Sierra Nevada foothills and destroying much of the town of Berry Creek. 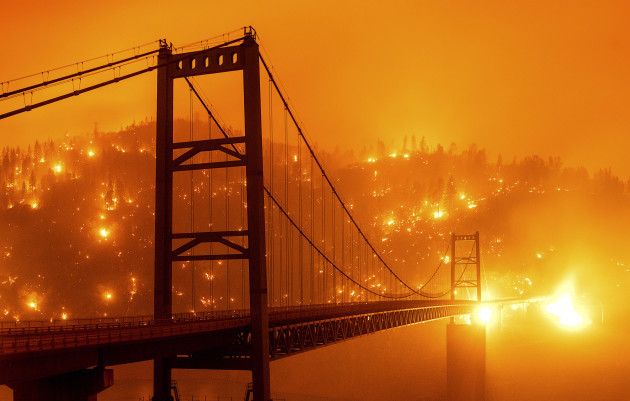 In this image taken with a slow shutter speed, embers light up a hillside behind the Bidwell Bar Bridge as the Bear Fire burns in Oroville, Calif.

More than 2,000 homes and other buildings had burned in the lightning-sparked collection of fires now known as the North Complex burning about 125 miles northeast of San Francisco.

Forecasters said there was some good news on the weather front, as winds were expected to remain lighter this week in the fire area, while dense smoke actually knocked down the temperature slightly and was expected to kept the humidity somewhat higher.

US President Donald Trump spoke with Governor Gavin Newsom “to express his condolences for the loss of life and reiterate the administration’s full support to help those on the front lines of the fires,” according to White House spokesman Judd Deere.

The North Complex fire is the 10th largest in the record books and growing as firefighters try to prevent it from advancing toward the town of Paradise, where the most destructive fire in state history two years ago killed 85 people and destroyed 19,000 buildings. 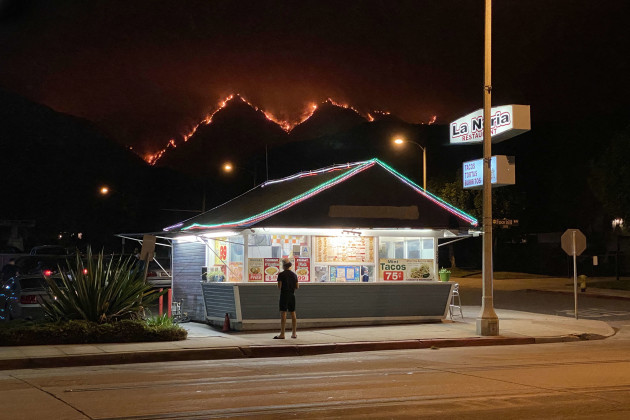 Some 14,000 firefighters continued to try to combat 29 major wildfires from the Oregon border to just north of Mexico, though California was almost entirely free of critical fire weather warnings after days of hot, dry conditions and the threat of strong winds.

Smoke blew into vineyards in wine country north of San Francisco, and rose above scenic Big Sur on the Central Coast and in the foothills and mountains of Los Angeles, San Bernardino and San Diego counties in the southern part of the state.

Numerous fires continued to burn in Washington and Oregon and dense smoke blanketed much of the West Coast on Thursday morning, darkening skies with hazardous air pollution.

A fire raging along the Oregon border destroyed 150 homes near the community of Happy Camp and one person was confirmed dead, the Siskiyou County Sheriff’s Office said.

A couple embrace while touring in an area devastated by the Almeda Fire.