Only the Netherlands was behind Ireland in meeting the goals.

IRELAND LOOKS SET to miss its 2020 renewable energy targets and ranks second last out of 28 European countries on progress so far, according to a new report from the Sustainable Energy Authority of Ireland (SEAI).

The fresh report, which is based on data from 2018, suggests that Ireland is not on track to meet its binding European Union target of having 16% of energy come from renewable sources by 2020.

The SEAI found that fuel from renewable sources made up just 11% of Ireland’s energy consumption in that year, leaving it significantly short of the 16% goal.

Out of the 27 EU member states, plus the UK, Ireland had made the second lowest progress towards hitting the targets, with only the Netherlands performing worse. 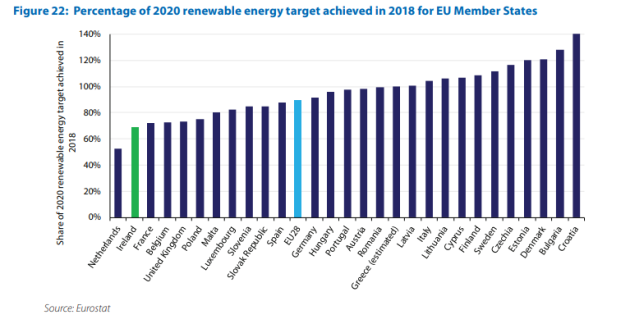 The SEAI’s data and insights chief, Jim Scheer, said the report demonstrated the challenges Ireland faces in transitioning away from fossil fuels:

We need to eliminate energy waste and transition to using more renewable sources of energy like wind, solar, heat pumps and bioenergy as quickly as we can.

“The government’s climate action plan sets out an ambitious course of action that could help us to kick our fossil fuel habit and reduce greenhouse gas emissions,” he said.

The report examined energy consumption under three headings: electricity, transport and heat. Ireland performed reasonably well on the electricity front, coming in 12th of the 28 countries by generating 33% of its energy from renewable sources.

This was largely due to increased generation of power from wind. Ireland had the second highest share of wind generated electricity in the EU.

Ireland’s performance in the transport and heat categories was significantly worse. Transport has the largest share of energy use and 97% of transport energy was from oil-based products.

The vast majority of renewable energy in transport came from biofuels blended with petrol and diesel, with renewable electricity used by DART, Luas and electric vehicles accounting for just 1%. 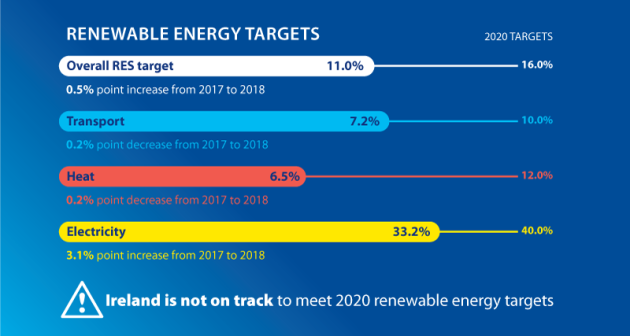 Ireland was also a laggard on the renewable heat front, coming in second last of the 28 countries, again only the Dutch performed worse. Over 93% of our energy for heat comes from fossil fuels.

The report notes that Ireland’s poor performance in renewable heat was the biggest reason for it failing to achieve its overall renewable energy target.

Commenting on the report, Minister for Communications, Climate Action and Environment Richard Bruton was keen to stress that the 2018 data predated his climate action plan which, he says, will help to rectify Ireland’s poor performance.

“The findings underline the importance and urgency of the work set out in that plan. I am convinced that the all of government approach underpinned by new Climate legislation is the way forward,” he said.

“However, getting back on track for our 2030 target is only the first step. We now need to identify how we can increase that ambition and set new targets for 2030 and 2050,” he added.