How Leinster went from rock-bottom to become serial winners

Leinster looked to be going nowhere in January 2016 when they were hammered 51-10 by Wasps. Unbeaten this season, they are four games away from becoming rugby’s Invincibles.

IT IS FOUR-AND-A-HALF years since the last rites were administered. A return of one win from six in the pool stages of the Champions Cup, including a 51-10 defeat to Wasps and four successive European defeats, resulted in big statements and grim predictions.

Leinster, it was written, were a team going nowhere. Or to put it another way, you wouldn’t find a tailor in Dublin waiting on a call to stitch a fourth star onto their jersey. More than ever, respective TV deals kept being mentioned in that 2015/16 season, how France’s Top 14 clubs were living off a €60 million per annum income, how England’s Premiership teams shared £45 million between them while the Pro12 paupers had to feed off €7.5 million rations.

Games, it seemed, weren’t being decided by the team sheet anymore, just the balance sheet. Eight times Irish sides met English ones in that year’s Champions Cup. Seven times they lost. “We can’t compete financially,” Leo Cullen said at the time. “We have to do something different.”

They have. Saturday’s Pro14 decider is the province’s fifth final in three seasons, with a sixth (by way of this season’s Champions Cup) a distinct possibility – the kind of consistency on both the domestic and continental stage that no one in the Pro14 can match.

Here’s how the turnaround happened.

It was early afternoon in September 2018 and Leo Cullen was wearing an air of agitated contemplation – the default setting of the modern-day coach. It had been a busy morning, posing for pictures beside the Champions Cup trophy that his Leinster team won the previous May, the flash of camera lights prompting moments of self-consciousness and awkward smiles. Later, he reappeared in a corridor on the Aviva stadium’s middle tier, more relaxed in this quieter spot.

Unusually for a head coach, he prefers it here, in the shadows, confessing on this day to feeling “a little green” in that rookie year when results headed south and his ears became sensitive to outside noise.

His life changed when Kurt McQuilkin announced he had to return to New Zealand for family reasons, necessitating a search to fill the Kiwi’s seat in the coach’s box.

It was Stuart Lancaster he turned to, the same Stuart Lancaster who had disappeared for two years after England’s 2015 World Cup debacle but who was now ready to show his talent in front of a continental audience. To his, and Cullen’s, enormous credit, they made the marriage work, one complementing the other, Bilbao the unlikely honeymoon destination as Leinster won the European Cup for a fourth time in May 2018. 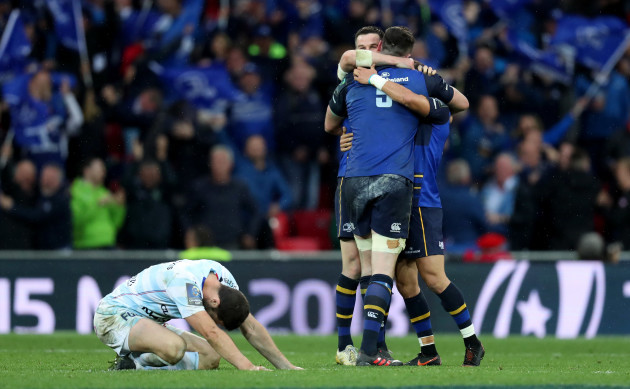 Yet this was where things could have got complicated, because in the aftermath of that victory over Racing 92, a lopsided amount of praise was heaped on to Lancaster’s shoulders, whereas Cullen, the sole recipient of all the grief in 2015/16, simply had to accept the fact that an Englishman’s redemption was the only story people wanted to tell.

Was the attention that Lancaster received a source of annoyance? “No,” he replied, perplexed by the query. “Why would you even ask that question? I honestly don’t even understand it.”

Those who have studied the personalities of coaches and managers from various sports, have a clearer comprehension, though.

While some managerial partnerships – Brian Clough and Peter Taylor – worked, others, such as Roy Evans and Gerard Houllier – didn’t.

But the difference between Cullen/Lancaster and Evans/Houllier is that the latter was an arranged marriage whereas Cullen proposed to Lancaster. Of added significance is the fact the Englishman is a Leinster rather than an IRFU employee. Therefore technically he reports to Cullen.

It works. Cullen’s lack of ego helps as did the awareness to realise he needed an experienced voice on the coaching paddock. This so happens to be the department Lancaster thrives in.

Considered a much superior technical coach to Cullen, Leinster’s players have responded to his intelligent and clear messages. “You get the chemistry from meeting people straight away,” Cullen said that day in 2018. “So with Stuart, it was a good relationship from day one. With Kurt leaving, we were having a tough time, a lot of uncertainty, and Stuart had come off a difficult period as well. It made sense to me.”

That the garlands bypassed Cullen in their double winning year is neither here nor there, he claims. “Success has many fathers,” he said that day, later joking that a question about how an “ego is the enemy of a coach” sounded like the title of a cheap book. “When you are coaching a team, you need to be unbelievably passionate about it,” Cullen said. “So what I want is what is best for the team and if you get that right first, then it becomes pretty easy.”

Still, if he had nothing to offer apart from a lack of ego, then Cullen would never have retained the respect of the dressing room, never mind his job. His own contribution to Leinster’s success goes beyond his ability to show modesty and recognise an out-of-work coaching talent. 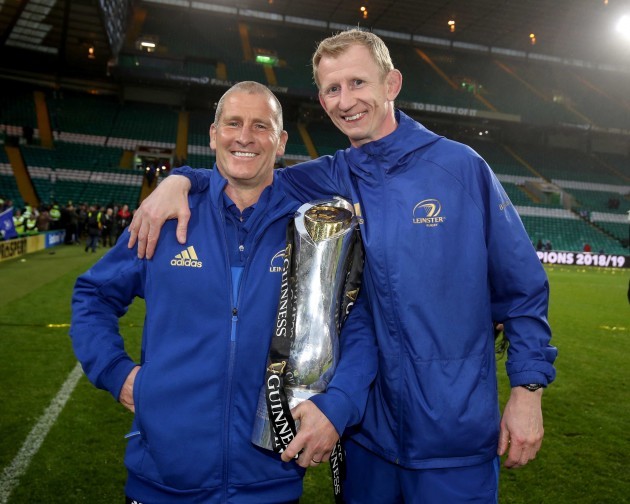 The Cullen/Lancaster marriage has worked.

You’ll win nothing without kids

It was an October night in Belfast and Cullen was midway through his sentence when a journalist’s phone started to ring. Embarrassed, the reporter frantically rumbled around his pocket to press the mute button, his ringtone set to the opening verse of the Dad’s Army theme tune.

If there was an irony, it was not so much that the interruption had arrived just as Cullen was speaking about his team’s struggle to maintain their focus, more so that on the night Jordan Larmour scored his coming-of-age try against Ulster, the accompanying soundtrack referred to “old England”.

For very little is old in that Leinster dressing-room.

Under Cullen, they have continued to refresh their squad with new talent – seven of the starting XV who defeated Munster last Friday aged 25 or younger and supplementing those numbers on the bench was Ryan Baird, the 21-year-old lock, who made his debut earlier this season against Zebre.

Treviso and Zebre is where it often starts for Leo’s boys, six of those 25-or-under-brigade making their Leinster debuts against those clubs, chalking up minutes in off-Broadway shows where the audience isn’t so large and a bad performance can go largely unnoticed.

It is a situation Cullen has cleverly exploited. Like it or not, the Pro14 is a lopsided league, filled out with some bang average sides and several clubs who are thin on talent. The Leinster formula is to test the newbies here first. Scan through the stats and you’ll see a lot of debuts coming off the bench in Italy followed by first starts against weakened Edinburgh, Cardiff or Dragons sides during international windows.

If they pass those tests, tougher ones are offered – minutes off the bench in an inter-pro, then in a Champions Cup tie. Prove it there and Cullen will back them. No longer is anyone picked on reputation.

In his first year in charge, a harsh lesson was learned after the Pro12 final defeat to Connacht, when two selections – Rob Kearney at full-back and Richardt Strauss at hooker – were arguably based on their names rather than their form.

That mistake hasn’t been made since. It’s why Ronan Kelleher, with his 12 Leinster caps was preferred to Sean Cronin last Friday; why 15-times capped Hugo Keenan got the nod, why 21-year-old Baird was on the bench, why Will Connors edged out Josh van der Flier. 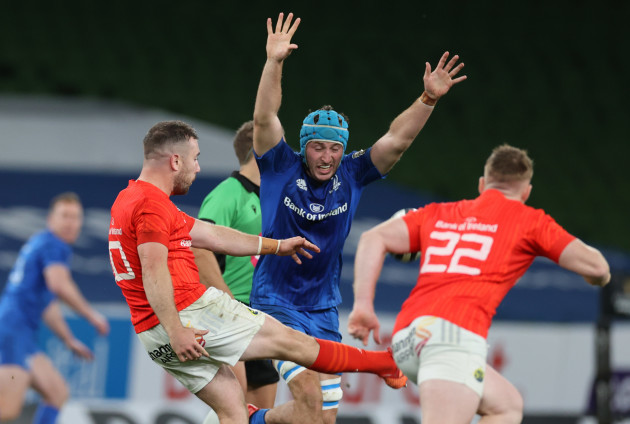 Connors was selected ahead of Van der Flier for last week’s Munster game.

If there is one thing Cullen figured out quickly when he got this job, it is that you will win nothing without kids. “It’s something we’ve worked so hard on, giving young guys the opportunities to grow,” he has said. “It takes time, but there’s a harmony between the young guys coming in and the older ones encouraging them.”

After that 2015/16 season, Cullen went to the Leinster board with a suggestion. Graham Henry was available for consultancy work. He didn’t come cheap but it would prove a worthwhile investment, Cullen argued.

So for three weeks of the following pre-season, the 2011 World Cup winning coach stood on Leinster’s sideline and took one mental note after another, passing on advice gleaned from three decades coaching at the top. A player driven culture was the only one worth considering, Henry maintained.

Cullen knew it too. When he was captaining Leinster to three Heineken Cup wins in four years, the side he played on had a real sense of what they were about. The walls of their dressing room had motivational phrases that summed up their ethos.

Yet something was amiss in his first season. The pictures of the 2009, 2011 and 2012 winning teams were hardly relevant given how in a two-year period, Cullen, Brian O’Driscoll, Gordon D’Arcy, Shane Jennings, Kevin McLaughlin and Mike Ross all retired.

New stars were emerging – Jack Conan, Dan Leavy, van der Flier, Garry Ringrose, Tadhg Furlong – and so new values were needed because the old ones, the things written on the wall, were pieced together by players who had since retired, words which meant nothing to the current crop.

Even the song they ran out to at the RDS, Welcome to the Jungle was meaningless. Most players didn’t even know who sang it, never mind what it was about. So they agreed on a new song, All of the Lights. 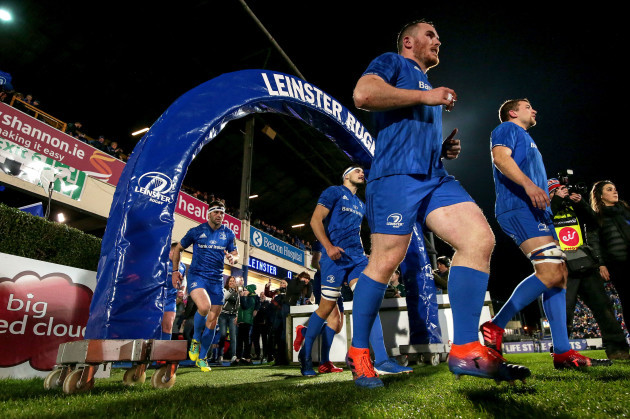 Leinster changed their team’s song in 2016.

That was four years ago, the same summer a new list got posted on the wall, this one having three core values. No1 was ‘humility’ – the only value retained from the old list, written during the Schmidt era. The second word they wrote up was ‘brothers’. Thirdly, they had to become ‘ruthless’.

So, as a team they started celebrating big moments in games again. If a turnover was won, a try scored, a penalty awarded, it was perfectly okay to congratulate your ‘brother’. Cullen didn’t want robotic personalities in his squad; he wanted these men to enjoy what they did for a living.

Monday morning review meetings remained a tough place, though. People were held to account for mistakes made in the previous game. But a new phrase was also introduced. Shut Up, Move on. When the review meeting ended, everyone was drilled to focus on the next game, not the previous one.

“Money can buy you players but not always success,” Luke Fitzgerald, the former Irish international and Leinster player, said in 2018. “Ireland’s provinces have a culture. Players join the academies and work their way up. They’re embedded into a way of training, behaving and playing from an early age. You can’t buy that.”

When they do enter the marketplace, though, they come up trumps.

They rarely sign duds. Going back to Rocky Elsom’s signature, Isa Nacewa’s arrival and Brad Thorn’s brief period in Dublin, Leinster had a history of shopping well. That has continued, Guy Easterby’s contacts helping them source James Lowe, while the decision to choose Scott Fardy in 2017, was inspired.

One thing can’t be ignored, though. By virtue of their location, Leinster are the recipients of a deep source of player talent, delivered, gift-wrapped, by the private schools of the area. In these circumstances, it would be a fairly spectacular effort to mess things up. But still. They’ve honed the talent well, Cullen’s decision to consistently back young players, reflected in his team-sheets.

And look at the results. Way back in the summer of 2016, plenty of dissenting voices said it was time to abort the Cullen experiment. They’ve since been semi-finalists, champions, finalists and quarter-finalists in Europe and two-time winners of the Pro14.

That’s some comeback from a 41-point hammering to Wasps.