Historic peace talks begin between the Taliban and Afghan government

HISTORIC PEACE TALKS have opened between the Taliban and the Afghan government, with the warring parties meeting face-to-face in Qatar even as violence continued on the ground in Afghanistan.

Abdullah Abdullah, the former chief executive for Afghanistan who is heading the peace process for Kabul, called for an immediate ceasefire and highlighted the ongoing toll of the war, saying 12,000 civilians have been killed and another 15,000 wounded since the US and the Taliban signed a deal in February.

“We have to use this exceptional opportunity for peace,” Abdullah said at the talks’ opening ceremony in Doha.

We have to stop violence and agree on a ceasefire as soon as possible. We want a humanitarian ceasefire.

Abdullah was joined at the opening ceremony by Taliban co-founder Mullah Abdul Ghani Baradar and US Secretary of State Mike Pompeo. 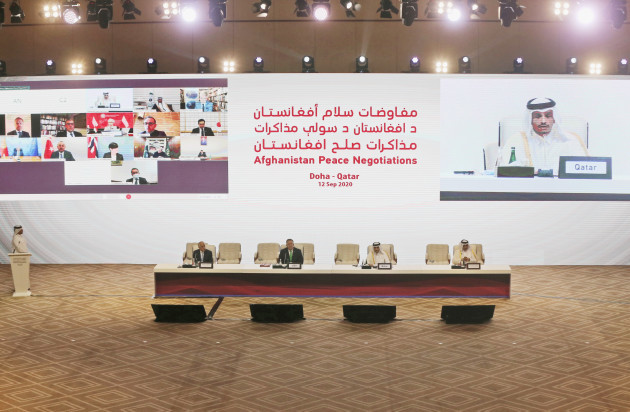 The opening session of the peace talks between the Afghan government and the Taliban in Doha, Qatar.

The talks come a day after the 19th anniversary of the 9/11 attacks which prompted the US to invade Afghanistan and topple the Taliban regime that had been sheltering Al-Qaeda leader Osama bin Laden.

The two sides must flesh out “how to move their country forward to reduce violence and deliver what the Afghan people are demanding – a reconciled Afghanistan with a government that reflects a country that isn’t at war,” Pompeo said ahead of the opening ceremony.

The talks are being held in a large hotel conference room where chairs were dotted at socially distanced interval facing a banner emblazoned with the words “Afghan Peace Negotiations” in four languages.

Delegates began to arrive from dawn at the luxury venue, which hosted the signing of a US-Taliban deal in February that paved the way for the talks.

President Donald Trump, up for re-election in November, has pushed hard to end the United States’ longest war and wants all foreign forces to leave Afghanistan by next year.

But a comprehensive peace deal could take years, and will depend on the willingness of both sides to tailor their competing visions for the country. 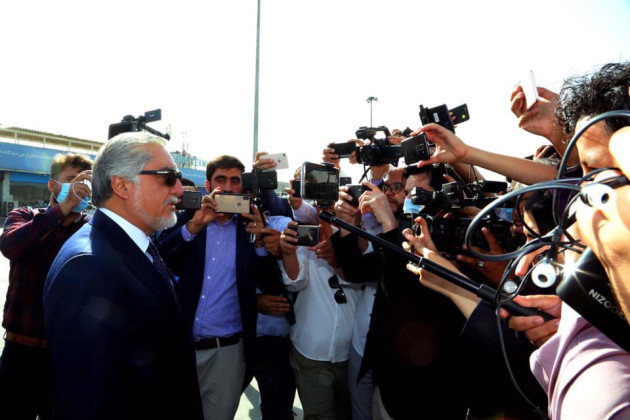 Chairman of the High Council for National Reconciliation Abdullah Abdullah talks with the press before embarking the plane for Doha.

The Taliban, who have refused to recognise President Ashraf Ghani’s government, will push to reshape Afghanistan into an Islamic “emirate”.

Ghani’s administration will seek to maintain the Western-backed status quo of a constitutional republic that has enshrined many rights including greater freedoms for women.

“My beard was black when the war began, it is snow white now and we are still in war,” said Kabul resident Obaidullah, 50.

“I don’t believe the war will end that soon, I am sceptical about the talks because both sides want their full agenda and their system enforced,” added the retired civil servant.

Many Afghans fear any Taliban return to power – partial or in full – could lead to a return of Islamic sharia law.

Human Rights Watch called on all participants in the talks to pledge to uphold basic rights as they chart the nation’s future.

Patricia Gossman, associate Asia director at the advocacy group, said that “all participants in any future Afghan government should commit to institutions and processes to uphold women’s rights and a free press, end torture in custody and ensure justice for abuses”.

The insurgents claimed victory in February after signing the Qatari-mediated deal with Washington that laid out a timetable for talks.

Qatar has quietly guided the process which has been complicated by violence in Afghanistan and the coronavirus crisis, with Doha’s chief negotiator Mutlaq al-Qahtani stressing on Thursday “the power of diplomacy”.

Doha invited the Taliban to open a political office in 2013 and helped broker February’s troop withdrawal deal between Washington and the Taliban.

The arrangement has led to tense moments like when the Taliban raised their flag above the office, sparking fury in Kabul.

Afghan soldiers during a military operation in Qelgho, the Nangarhar province, eastern Afghanistan.