Cullen pledges to address line-out issues ahead of Saracens clash

The Pro14 champs fluffed their lines at the set-piece during Saturday’s 27-5 victory over Ulster and know they face a tougher test this Saturday against Saracens in the Champions Cup.

LEINSTER COACH LEO Cullen has spoken confidently about addressing the line-out issues which were the one blot on his team’s copybook during Saturday’s Pro14 final victory over Ulster.

While Leinster’s performance in defence was extraordinarily good, one element of their set-piece creaked. And Cullen knows it.

Afterwards the Leinster head coach said: “It was mainly our own undoing, some of those throws. Sometimes the lift was a little bit off – and that is not down to any one person.

“Against Saracens, set-pieces are going to be huge. It didn’t cost us on Saturday. We weren’t great in that (department) but I think a lot of that is in our own control.

“When you get it wrong, it can look quite poor. I thought the players put in some good defensive sets but some of them were a consequence of us losing at the lineout. Obviously we’d have had to make less tackles if we able to win at the set-piece.”

“We know the threats that they have and even though they have had some (personnel) changes, they still have such quality throughout their team, some world class players in there so we need to make sure we’re peaking week on week.

“We’ve had four very physical games against the Irish teams which puts in a good place for Europe which is obviously a different challenge against an English team that has been playing in a different league with different interpretations of the game in terms of how it is being refereed. Additionally, Pascal Gauzere (a Top14 official) is the referee.

“We will put a plan in place on Monday.”

Whatever about the urgent need for Leinster to come up with a cohesive strategy to deal with Saracens’ threat, it has to be pointed out that the defending English and European champions will be looking this side of the Irish Sea with a degree of worry. After all, Leinster have not lost in over a year, Saturday’s title being their third Pro14 trophy on the trot.

Afterwards Cullen was anxious to share the praise with fellow staff members: “We are lucky and blessed with the group of coaches that we do have, and certainly I feel very, very fortunate to have the level of experience that I can lean on.

“But then there’s the kind of wider team as well – the staff we have.

“The players are obviously a very, very competitive group, they want to represent Leinster and are ambitious.

“There are times when selection has been very tough. Some guys would feel that maybe they haven’t got a full crack at it over the last couple of weeks and they’re probably right to think that.

“But you know – they’ve got to park that and do what’s best for the team.

“And they have. Some of the training sessions we’ve had over the last couple of weeks have been excellent and that has been a case of everyone pulling together. To go through the whole season unbeaten takes a great effort from everybody.

“So that’s the whole kind of mantra, we can’t rely on one person. The next person has to be able to step in.”

The man who stepped up this week was Josh van der Flier whose excellence against Ulster was rewarded with the man-of-the-match award. 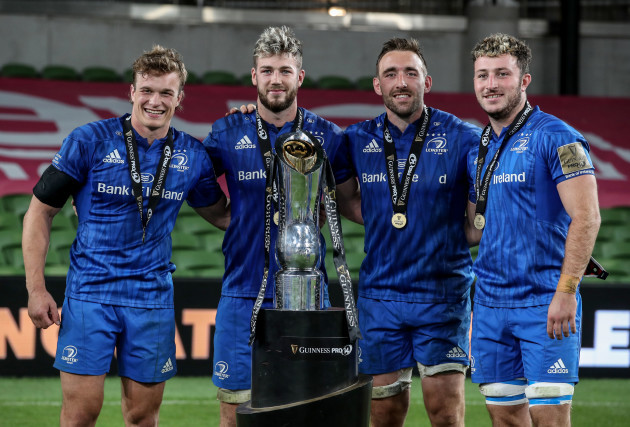 Now the Irish flanker has revealed how Leinster’s thirst for success has not been sated by the addition of a fourth major trophy in three seasons.

He said: “It definitely gives you a desire to go after more. When you taste some success, you want more.

“We are very fortunate that we’re in a position that we do get to work for years and years and get the opportunity to play for Leinster and then win trophies. There’s incredible players that don’t get that opportunity.

“So Saturday’s final meant a lot. Last year was my first professional final, I missed the others with injury and everything. So, that was my first taste of playing in a final and winning a trophy that way. I wouldn’t say it’s very usual for me. We’re very much driven on to get that sense of reward and success again.”