THE heatwave blessing the UK is refusing to budge as forecasters say we’re in for another 12 days of warm weather.

It comes as September is tipped to be the hottest in four years after rain washed out the end of the school holidays and highs could push 28C in some parts today.

According to The Mirror the next week could also see balmy days, lengthening the September blast into what has been dubbed a “second summer”.

Today nudged the hottest September 15 for almost 200 years, with 30.6C the record since date temperature records used for Met Office records began in 1841.

A 1,500 mile-wide ‘Saharan spurt’ of hot air is making temperatures up to 11C hotter than the 20C average.

Southern parts of Britain are hotter than 29C Antigua, in the Caribbean. Even the North saw 25C.

The Met Office forecast 28C for tomorrow then 24-25C daily for the rest of the week and into next week.

Although the mini-heatwave is set to have a knock-on effect throughout the week, things will have cooled down by the weekend.

According to the Met Office, here’s what we can expect: “[Saturday will be] Cooler than earlier in the week, but still warm in the south.

“Remaining mainly dry with sunny spells and light winds for most parts on Sunday and into the start of next week.

“Any isolated mist and fog patches in the north each morning quickly clearing. However, the far south and southwest will remain breezy with possible thundery showers.

“Temperatures around average for many though probably warm in the south.” 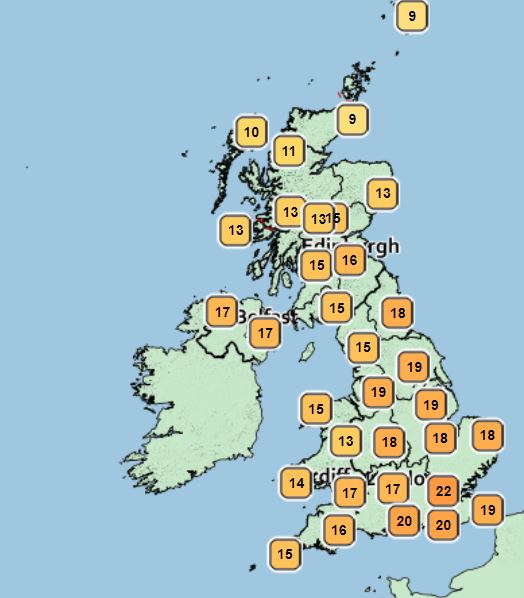 Brits have baked in some of the hottest September temperatures ever seen this week during a ‘Saharan spurt’.

Higher temperatures are expected to carry on throughout the week, reaching 28C in some areas tomorrow.

It’s predicted the warmer weather could last into next week, too.

CLOUD AND RAIN TOMORROW FOR SCOTLAND

Wednesday will see some cloud and rain for Scotland.

It will be mostly dry and sunny everywhere else.

The Met Office says of tomorrow’s weather: “Cloud with a little light rain or drizzle moving southwards across Scotland, northern and eastern England, where it will feel much cooler. Very warm sunshine for southern and western parts.” 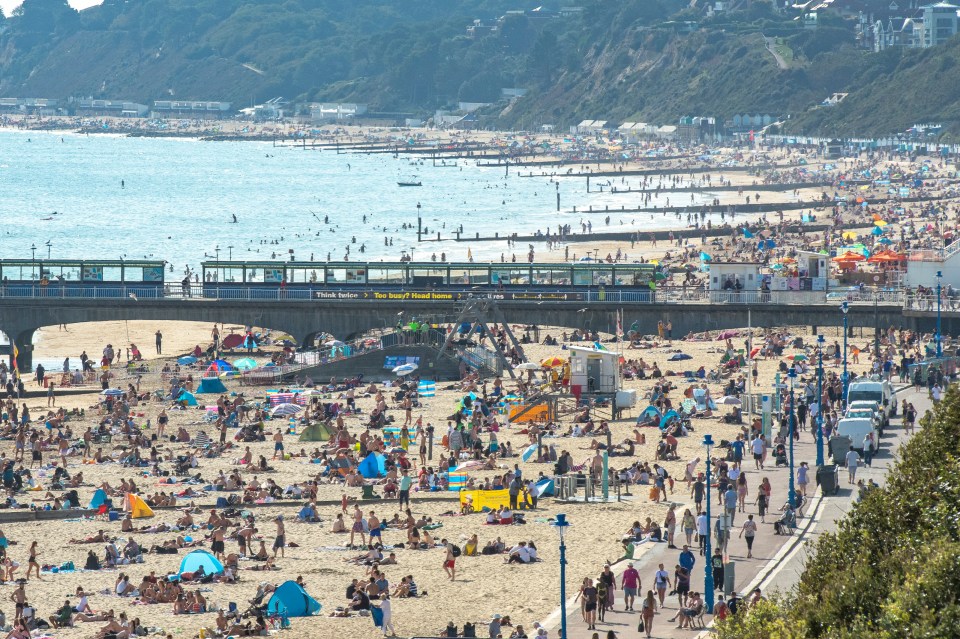 According to the Met Office, tonight’s forecast is set to be mostly dry.

According to their website, tonight will see: “Isolated showers possible almost anywhere but most parts dry with clear spells. Some low cloud and fog forming, especially near coasts and in the southwest of England and Wales. Light rain and drizzle moving southwards across Scotland, where turning cooler.

Some forecasters are branding the mini September heatwave a “second summer”.

The Weather Outlook forecaster Brian Gaze said: “Warm and sunny weather ahead will feel like a second summer after wet and windy conditions dogged the second half of school holidays.”

The evening is set to stay dry and warm for the majority with plenty of late sunshine, the Met Office reports.

A few showers are expected across parts of England and Wales.

The front across Scotland will continue to provide some patchy light. 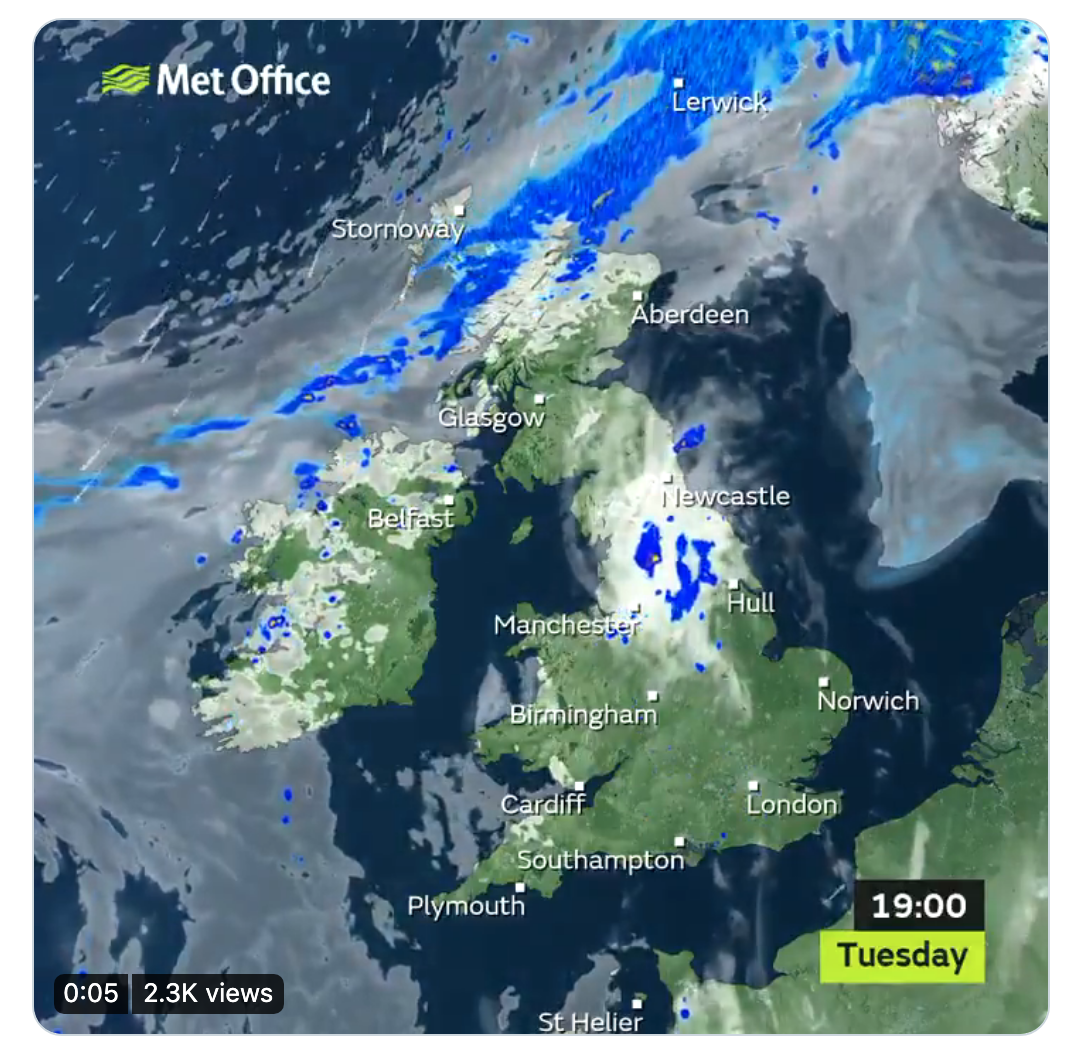 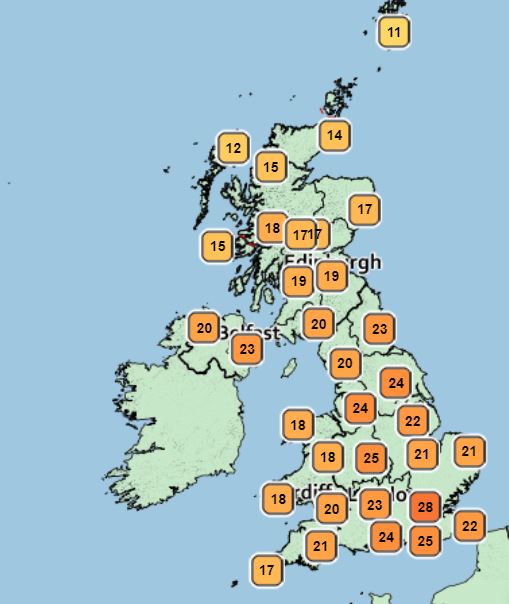 There could be highs of 27 or 28C again on Wednesday, but as we head towards the end of the week the heat will begin to move away and temperatures will drop to the low 20s in the warmest parts, according to one Met Office forecaster.

Forecaster John Griffiths added:”It’s not that unusual for this time of year, we quite often get warm spells of weather in September,” but these temperatures will still be some way off the highest September temperature ever recorded, which was 35.6C on September 2, 1906.

A Met Office forecaster described the recent spell of warmth as “wall to wall sunshine”.

And according to Met Office chief meteorologist Frank Saunders, high pressure combined with warm, southerly winds would bring a “spell of summery weather”.

A 19 year old who was pulled from a river during the hot weather has died.

Devon and Cornwall police confirmed that the youth had gone missing while swimming in the river at King’s Nympton, North Devon, on Monday afternoon.

His body was located just after 10pm on Monday night after a large rescue operation involving police, a helicopter, fire and ambulance staff.

The teen, from Barnstaple, Devon, has not yet been named but police say there are no suspicious circumstances. 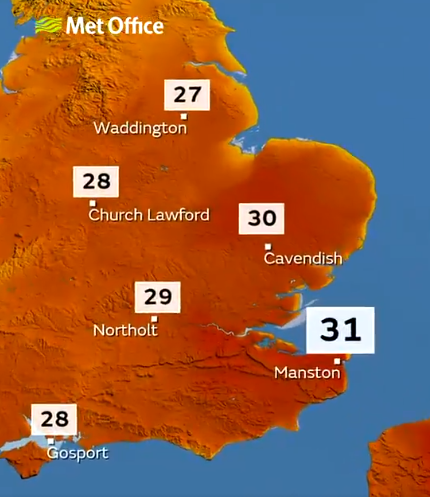 The Met Office has forecast a warmer-than-normal three months through autumn.

September to November is up to 10 times more likely to be much-warmer-than-usual than much-cooler-than-normal.

The Weather Outlook forecaster Brian Gaze said: “Warm and sunny weather ahead will feel like a second summer after wet and windy conditions dogged the second half of school holidays.”

Crowds have flocked to beaches for one last taste of summer as the mercury soars towards 31C today – making the UK hotter than Hawaii.

Sun-worshippers are making the most of the glorious September weather at resorts around the UK, with many heading for popular stretches of coastline.

Brits have baked in some of the hottest September temperatures ever seen this week during a ‘Saharan spurt’.

And as it heats up to a 30C scorcher again today, many families are making the most of the day with a cooling dip in the sea.

Sandy beaches along the Dorset coast are packed with people basking on beach towels.

Thousands of people have visited the seafront at Bournemouth to bask, while further down the coast, in Swanage, surfers have taken to the water. 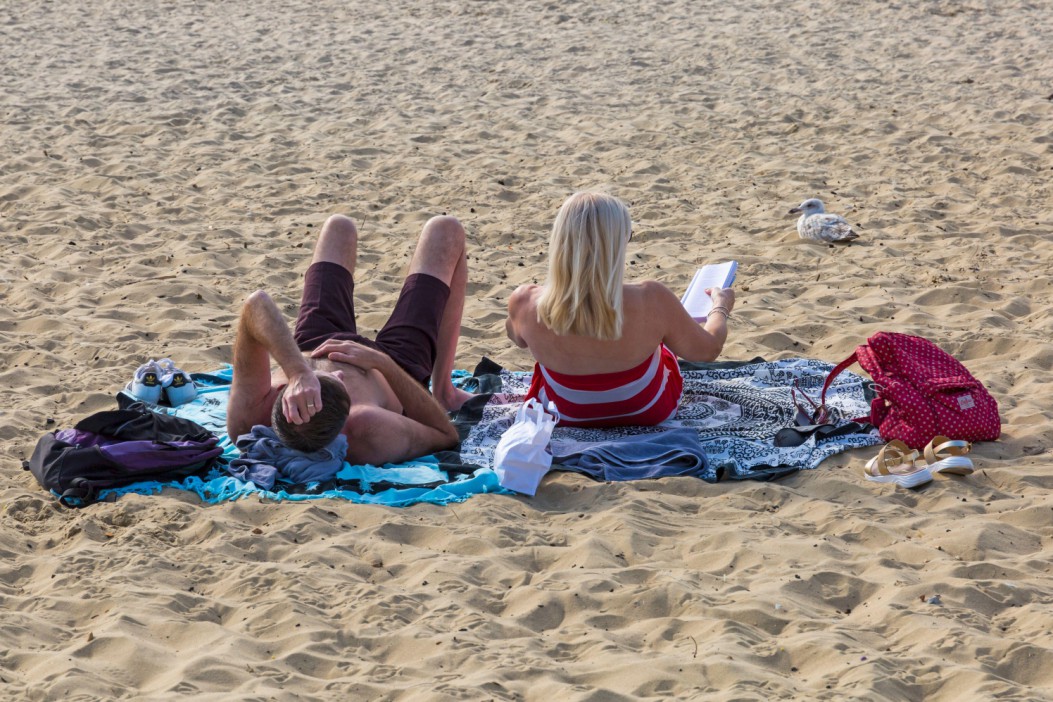 Britain’s soaring temperatures are too hot for some train services as rails risk warping.

Network Rail tweeted: “Due to hot weather, a speed restriction is in place at Northampton. Trains may be delayed.”

“Speed restrictions are imposed as slower trains exert lower forces on the track, reducing the chance of buckling.”

Brighton’s beach was rammed with sunbathers today as locals took advantage of the unseasonal Autumn heat.

Temperatures in the coastal town had hit 26C by 2pm and the sunny weather is tipped to hang around all week. 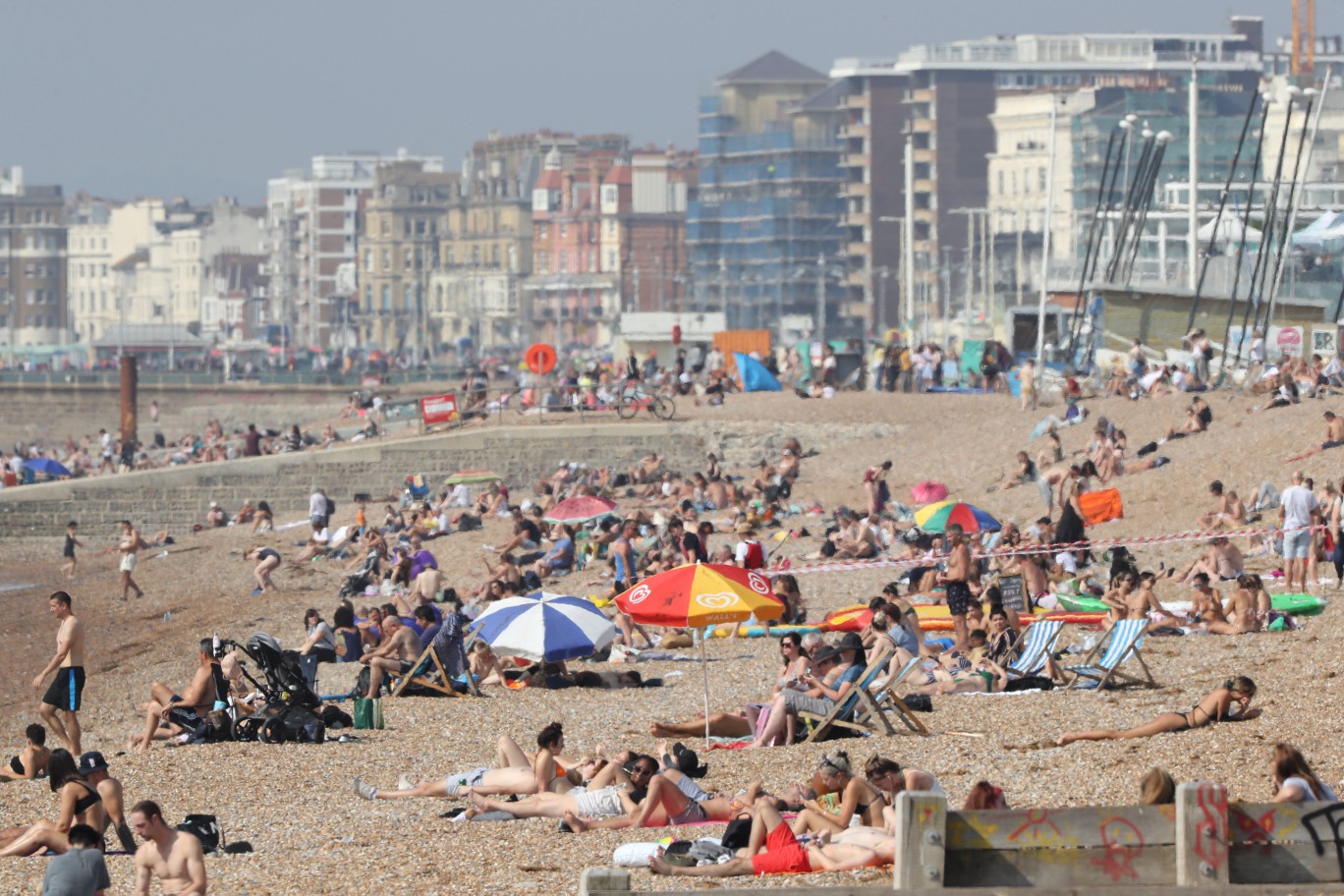 Britain is now hotter than Antigua and a ‘second summer’ starts now with 12 days of sunshine and temperatures of 25C running into next week.

The weather – tipped to hit 31C today – is the best for a month after rain washed out the end of the school holidays.

Today nudged the hottest September 15 for almost 200 years, with 30.6C the record since date temperature records used for Met Office records began in 1841.

A 1,500 mile-wide ‘Saharan spurt’ of hot air is making temperatures up to 11C hotter than the 20C average.

Southern parts of Britain are hotter than 29C Antigua, in the Caribbean. Even the North saw 25C.

The Met Office forecast 28C for tomorrow then 24-25C daily for the rest of the week and into next week.

POLICE KEEP AN EYE ON SUN SEEKERS IN LONDON 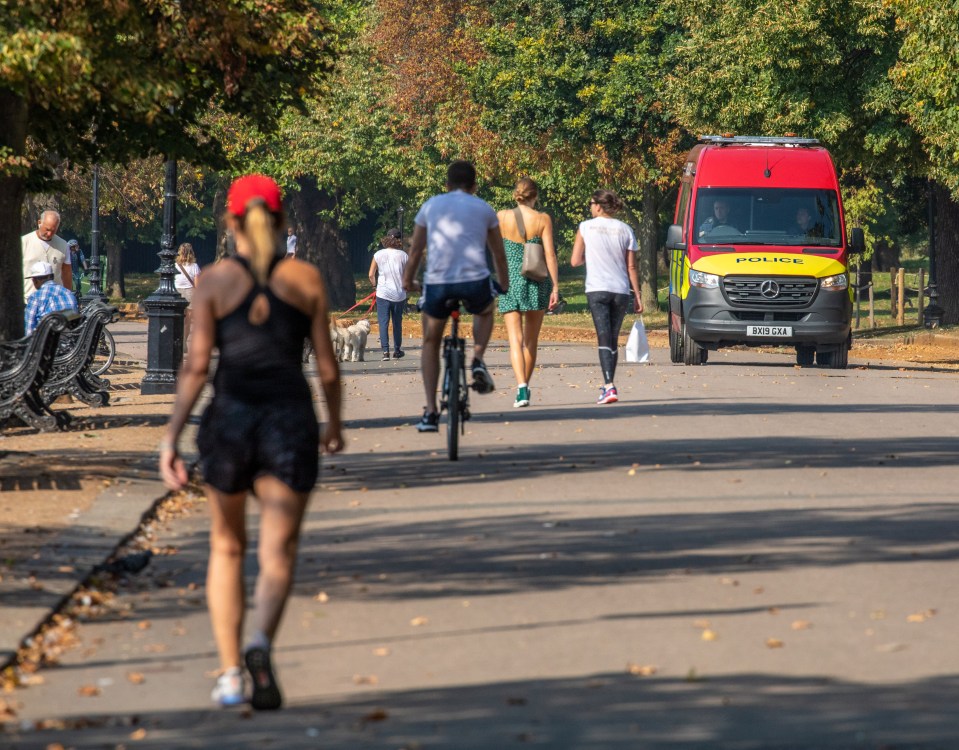 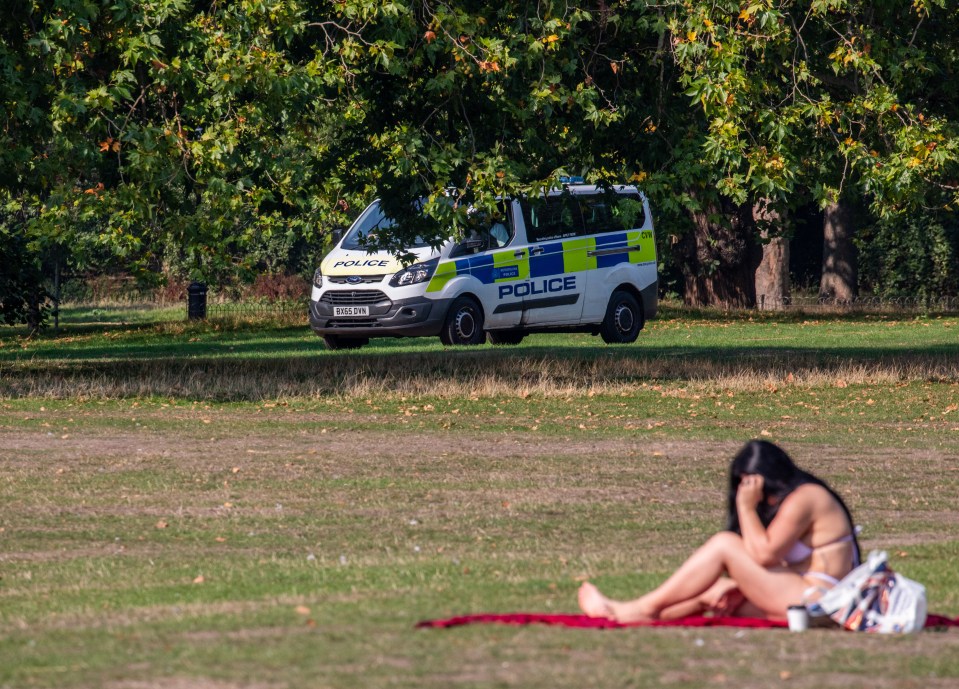 The Met Office says that from Friday to Sunday, September 27 “mainly dry, settled weather seems likely to continue through the middle and perhaps the latter part of next week, bringing sunny spells.

“The best of these conditions will likely be found in the northwest.

“However, there is a chance of the odd thundery shower, more especially in southern and southwestern areas.

“Above average temperatures are likely for many locations and it could be very warm in the south, whilst the northeast may feel rather cold.”

The service warns of “strong easterly winds, particularly in southern and central areas.

“There is potential to see more unsettled conditions becoming more widespread across the UK at times, bringing spells of wet and windy conditions with temperatures falling closer to average,” it adds.

BBC’S PIC OF THE SUMMER WINNER 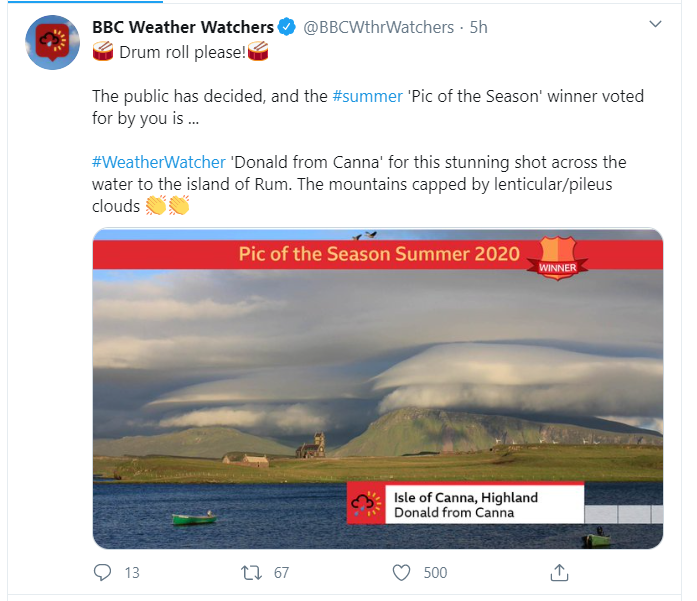 The hot weather can increase the risk of catching Covid-19 as sweat can make your mask slip, say experts.

Excessive heat can also lead to heavy breathing – increasing the number of droplets ejected through the mouth and nose.

Sweating cannot directly transmit the virus, but it “may make your mask slide down and constantly putting it back in place with your hands isn’t recommended,” warned Dr Roland Krzentowsk, a French specialist.

Other medics say it is best to be extra cautious in hot weather.

“Sweat is not a means of transmission, but we should all be careful,” said Juan Gestal, professor of preventive medicine and public health at the University of Santiago de Compostela.

“As a preventative measure, we need to wash our hands after use and avoid touching our eyes, mouth, or nose.” 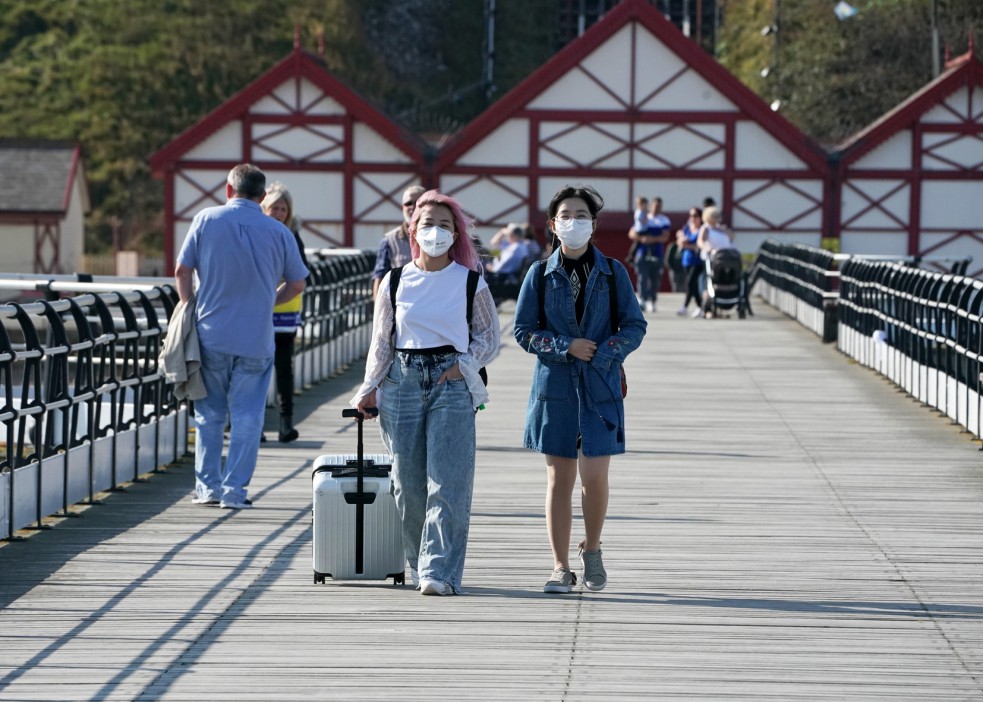 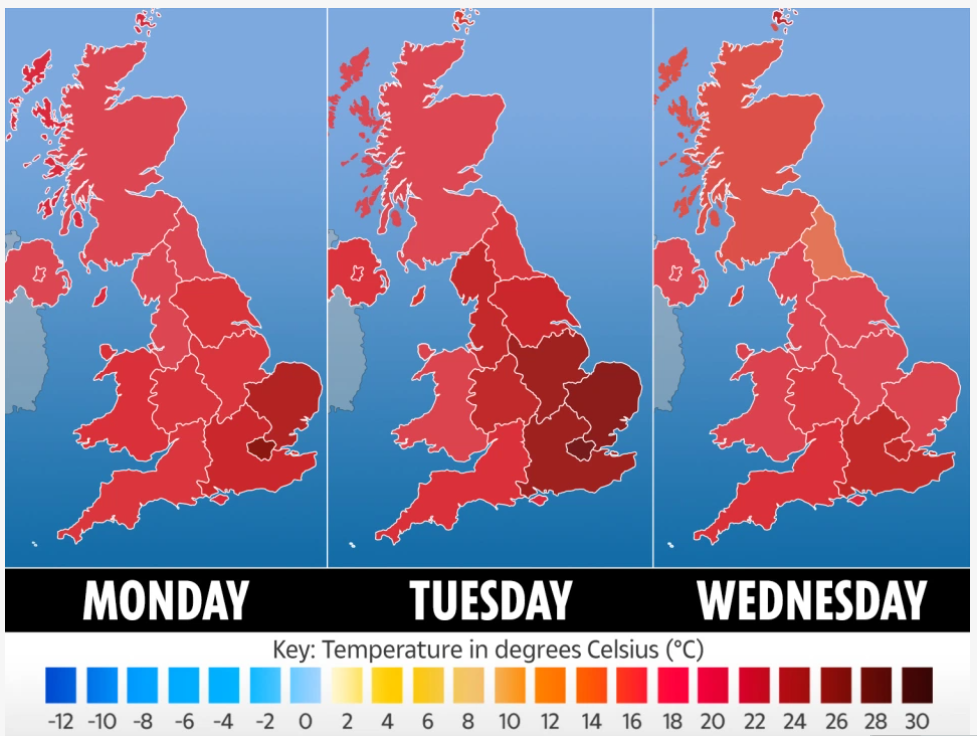 A health alert has been issued with temperatures expected to reach around 31C in some parts of the country today.

Forecasters said most will enjoy a spell of warm weather, but the South East is expected to see the hottest conditions.

Public Health England (PHE) has issued a heat warning for southeastern and eastern parts of the country and has asked people to check up on those who are most vulnerable in hot conditions.

John Griffiths of the Met Office said: “Tuesday we’re still looking at highs of 30 somewhere in the southeast, maybe even a spot of 31, but it will already be cooling off in some southwestern areas.”

Parts of the UK were hotter than Marbella and Tenerife on Monday and temperatures are set to soar even higher today.

The mercury hit 30C across London – making it warmer than many of Europe’s top tourist destinations.

Temperatures are expected to rise to to 31C today far exceeding the September 20C average in London and the south east.

It means parts of the south could pass the threshold for a heatwave, which requires three consecutive days of temperatures above 28C, according to the Met Office. 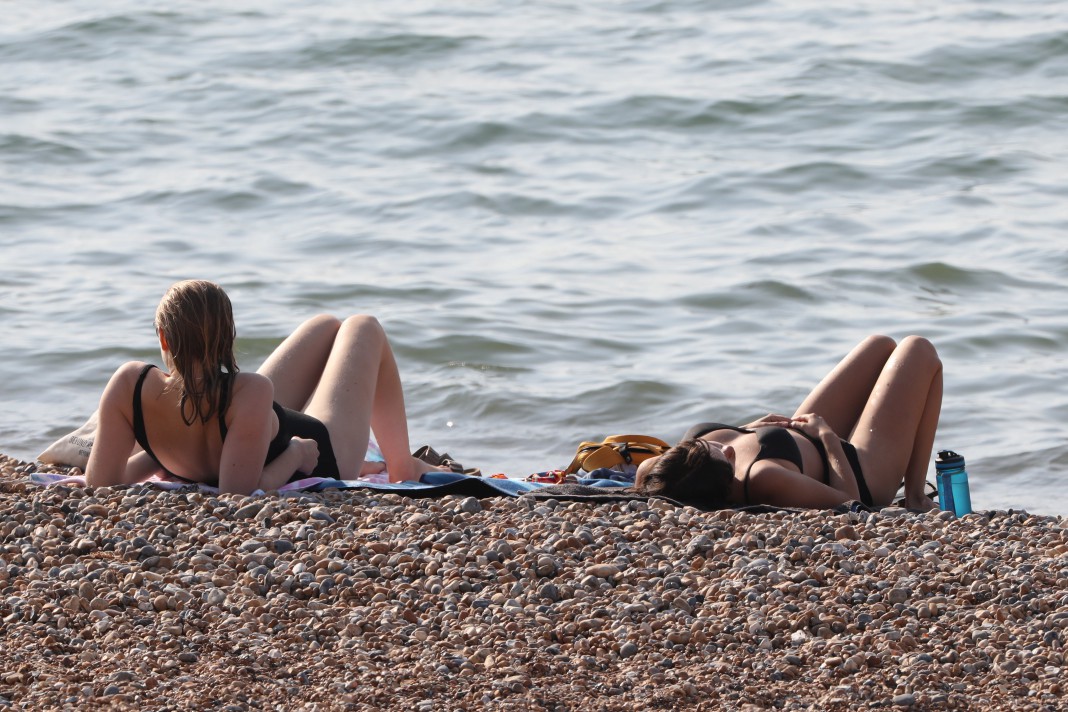