Bennett is set to become the first Irishman in 31 years to win the prestigious green jersey when the Tour de France finishes up in Paris today.

SAM BENNETT SLUMPED into his seat and talked about survival. Earlier that day he had finished no less than 34 minutes and 21 seconds behind the stage winner Dani Martínez on the road to Puy Mary. Officially he was the last cyclist to cross the line that day, stage 13 of the Tour, and yet the Irishman still ended it on the podium, wearing the green jersey, the prize given to the rider who collects most points at intermediate and finish sprints. To put this in context, no Irishman has done this since Sean Kelly left Paris in green in 1989.

Still not impressed? Well, how’s this for a stat? The cyclist immediately behind Bennett in the points classification contest is Peter Sagan, a three-time world champion who has won seven of the last eight green jerseys. Sagan just so happens to be able to climb as well as sprint, adding points on the hills where most sprinters just suffer. And Carrick-on-Suir’s Sam Bennett was certainly suffering as he entered Puy Mary, in danger of being cut from the race if he finished outside the time-limit. 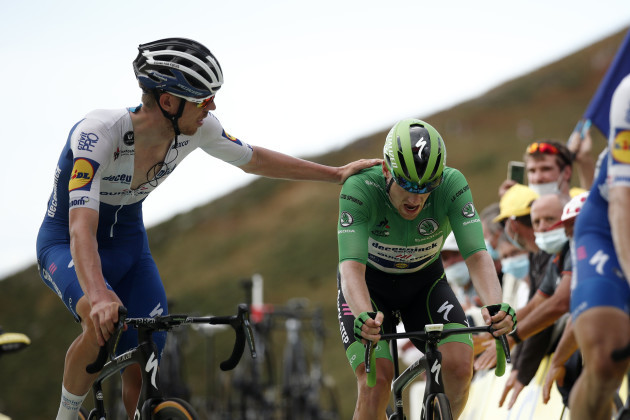 Bennett’s suffering on the hills has been worth it as he heads for Paris today.

But those who know the Sam Bennett story know that giving up is not in his DNA.

You only have to think back to 2010, when he feared he could lose his leg after a winter training session in Kilkenny ended in disaster, a car crashing into him, his day ending in hospital. “I remember waking up at one point and they were talking about amputating my leg,” he later told the Sunday Independent’s Paul Kimmage. “I started screaming: ‘Don’t take my leg.’ Some trainee had put the bandage on too tight and got a bollocking from the doctor: ‘You f***ing eejit.’”

So when you think back to his breakthrough day on this tour, Bennett apologising for being ‘a cry baby’ after his stage win on the Ile de Re, you kind of get a picture of why it meant so much.

For the 29-year-old’s career has been one of scrapping to make it to the top, wondering in his early 20s if he was going to be given a new contract to enable him stay in the sport. “I was walking home one day after training,” he said in an interview in 2017, “when somebody picked me up and asked ‘How is it going?’ Because I was thinking I was going to give up, I broke down in the car and he didn’t know what to do.”

He’d learn. He got his contract and gradually he improved – as he changed his training in 2018 to focus more on endurance and strength. Stage wins came on the Giro D’Italia, later on Vuelta a Espana – the kind of info that a sprinter writes in bold on his CV. “I was 27 when I won on the Giro,” he said, “and when I did that, the pressure was gone. It was easier then because the first one was done. Then you want more. You get greedy.”

His appetite was only sated when he won Stage 10 on this year’s Tour de France, making him the first Irish rider since Kelly to lead any competition at the Tour and only the second Irishmen, after Shay Elliott, to win stages on all three Grand Tours. 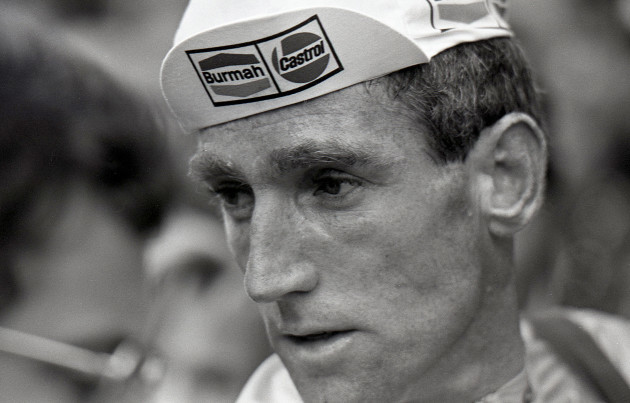 Sean Kelly was the last Irish cyclist to win the Tour’s green jersey.

“What can I say, it’s great to see Sam in the green jersey,” said Kelly, who saw him grow up in Carrick and who brought him through the ranks at his An Post team at the start of the last decade, watching him evolve from a kid into a star.

“I remember when he was young, maybe 13 or so, before he started racing back in Ireland actually, and we used to be down by the seaside in a caravan park and he used to be racing around there with my son who is the same age, and people would be giving out to them because they’d be zig-zagging and riding in between people. That was before he joined the local club and got into racing,” Kelly told Cyclingnews.

“When he started back in Ireland he was dominating the races all the time. There was always that potential there but it’s always difficult to know how far riders will go because they can be really good in the juniors but when they move up they don’t perform at the same level. When Sam moved up to the under-23 level, though, he showed that he had a fast sprint. We took him onto the An Post team and he kicked on a lot. He won a stage in the Tour of Britain and that was a bit of a breakthrough for him.”

It certainly was. Had he not done so well in that Tour of Britain, seven years ago, he may have not got a contract with pro team, NettApp-Endura. Without a contract, he may have given up. “It was a case of would I give up cycling, go back to college and get a degree or something,” he said in a 2014 interview. “If I didn’t make it that year, I knew I was getting older and it was going to be harder to get a team.

“It was make or break. The team needed a sprinter and I knew I was in the shop window. Thankfully they were impressed when I got a few results.”

Lately, the results have got better and better. One of his best was on Friday’s 19th stage to Champagnole, when he finished eighth in the reduced bunch sprint. Sagan, his rival, came ninth. The green jersey was pretty much guaranteed then.

“I think when I arrive onto the Champs Elysees [on Sunday], for that first lap, wearing the green, it’s going to be amazing,” Bennett said last night after completing Saturday’s time trial to La Planche des Belles Filles. “I’ll probably have a tear in my eye.”

Theoretically, Sagan can still catch him. He trails Bennett by 69 points and 70 points are still up for grabs. So if Sagan wins all the intermediate sprints and the stage itself, then the green jersey could be his – providing of course, Bennett doesn’t pick up a point.

But realistically, there is no chance of that happening. “I’m ready,” he said last night of the challenge he faces today.

Having spent a lifetime waiting for the opportunity, he’s not going to pass it up now.