The much-anticipated upswing continuation came yesterday, and the bulls certainly fought hard to keep up the upside momentum. To what degree have they been successful with most of the intraday gains evaporating before the closing bell?

The intraday volatility is high and offers many opportunities to profit on both long and short positions. And that’s certainly what we did earlier this week, cashing in a 168-point gain on Friday-opened short position, and two more profitably closed positions (both were long trades) yesterday for an 82- and 52-point profit, respectively. In total, that’s 302-point gain this week so far!

But going into the employment data today, how does the technical outlook look like right now?

Let’s start our analysis with the daily chart examination (chart courtesy of http://stockcharts.com).

Stocks opened on a strong note yesterday, yet didn’t close in a show of strength. While the futures tumbled in the final 15 minutes of the regular trading session, and extended losses thereafter, they seem to have rebounded from the low 2410s – for now.

These were our yesterday’s observations regarding the daily indicators’ posture:
(…) solidly in bearish territory, they’re increasingly curling higher, thus supporting another leg up.

While the above remains true, the rally and its path higher so far doesn’t seem to be proportionate to the monetary and fiscal stimulus thrown at the coronavirus fallout. And as more and more parts of the U.S. grind to a temporary economic halt, bearing directly on the U.S. consumer, industry and services, we can expect the sellers to return forcefully.

As the death toll and the associated economic impact coupled with the sense of alarm unfortunately grow over the coming days and weeks, we better brace ourselves for the renewal of the downtrend in stocks. Remember, this is a health crises affecting the works of the real economy, not a monetary or fiscal crisis. Therefore, we can reasonably expect the fiscal and monetary tools to play out their magic only when the situation on the ground stabilizes first, or when the market stops reacting to them. That would be similar to the early March 2009 bottom when bad news kept pouring in for weeks longer, yet stocks marched higher already.

Has the time come to jump back in on the short side?

Arguably, not yet – certainly not from the risk-reward perspective. Careful monitoring of both the technical and fundamental situation would allow us to identify such an opportune moment. And, in general, that goes for both the long and short trades. In these exceptional times, capital preservation is the call of the day as we’re in it for the long run. Therefore, we’re keeping our powder dry at this moment.

The above though didn’t prevent us from cashing yet another quick gain earlier today!

On top of all the above recapitulation, we went in for a 38-point profit a while ago, bringing this week’s total to 340-points gained so far!

Summing up, while the bears have the upper hand, the potential for a temporary upswing to resume, is still there. While a little underwhelming so far, this Fed and stimulus-triggered move might live on. It has the benefit of short-term doubt, but the upswing is kind of racing against the time, which is not really on its side. Considering the risk-reward perspective, we’re not entering into any new trades after the recent profitable string of respectable gains. 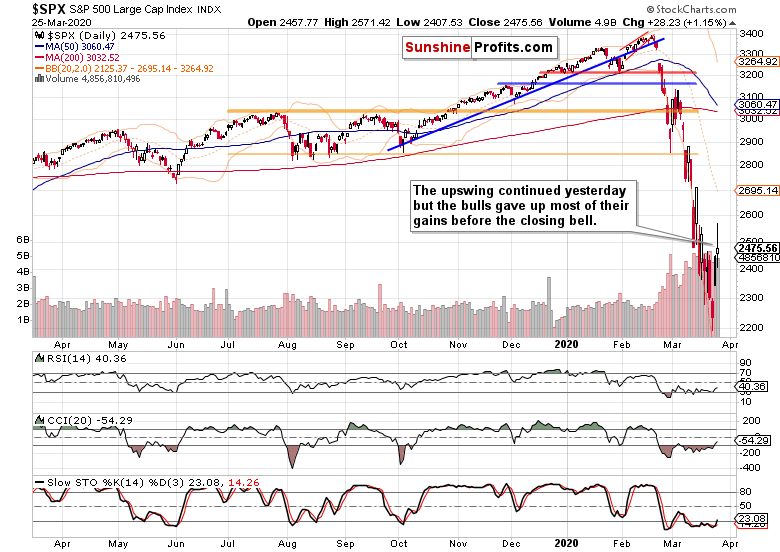