The lorry overturned at Liffey Valley, near the Hermitage, after a crash.

A WASTE LORRY is blocking a road in Dublin this morning after it overturned, spreading rubbish across a busy route.

Dublin Fire Brigade is at the scene, after the HGV rolled over following a collision with a car at Liffey Valley near the Hermitage Medical Clinic under the N4 at around 11.22am this morning.

Traffic restrictions have been introduced in the area, as officials try to clear the scene. No injuries have been reported.

AA Roadwatch is reporting that on the N4 inbound, the ramp at junction 2 is blocked by the lorry with traffic slow in the busy commuter area.

Photographs from the incident show rubbish spread across parts of the road, while a member of Dublin Fire Brigade hoses the underside of the lorry.

A spokesperson for Dublin City Council confirmed that three fire engines and an ambulance attended the scene.

“Patients were assessed on scene and the incident was handed over to gardaí. Traffic diversions are in place,” the spokesperson said. 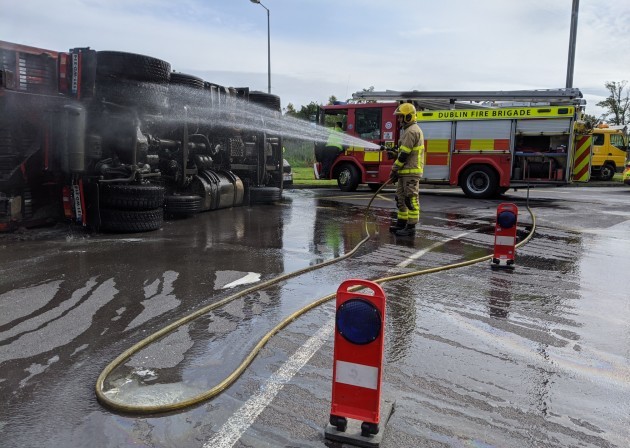 Members of Dublin Fire Brigade are currently at the scene.

It’s currently unclear how long it will take to remove the lorry and clear the rubbish.

The scene after the lorry overturned at Liffey Valley.