KINGSLEY COMAN was the hero as Bayern Munich beat PSG in Lisbon to win their first Champions League title since 2013.

Follow all the reaction from a dramatic night in Lisbon below…

Rio Ferdinand has his say on tonight’s game between PSG and Bayern Munich: “It’s one thing playing in your own league winning games, dominating possession 24/7, but when you’re playing against a team like this who out-possession you, then what do you fall back on.

“It’s the difference in taking your chances, we’ve always said that especially in this type of competition, you get an opportunity you’ve got to be clinical.

“We said before the game that PSG would get chances because of the way that Bayern play, they allow chances a lot of the games they play.”

NEY ME A RIVER

Tears for Neymar as he loses his first Champions League final since Barcelona’s win in 2015. 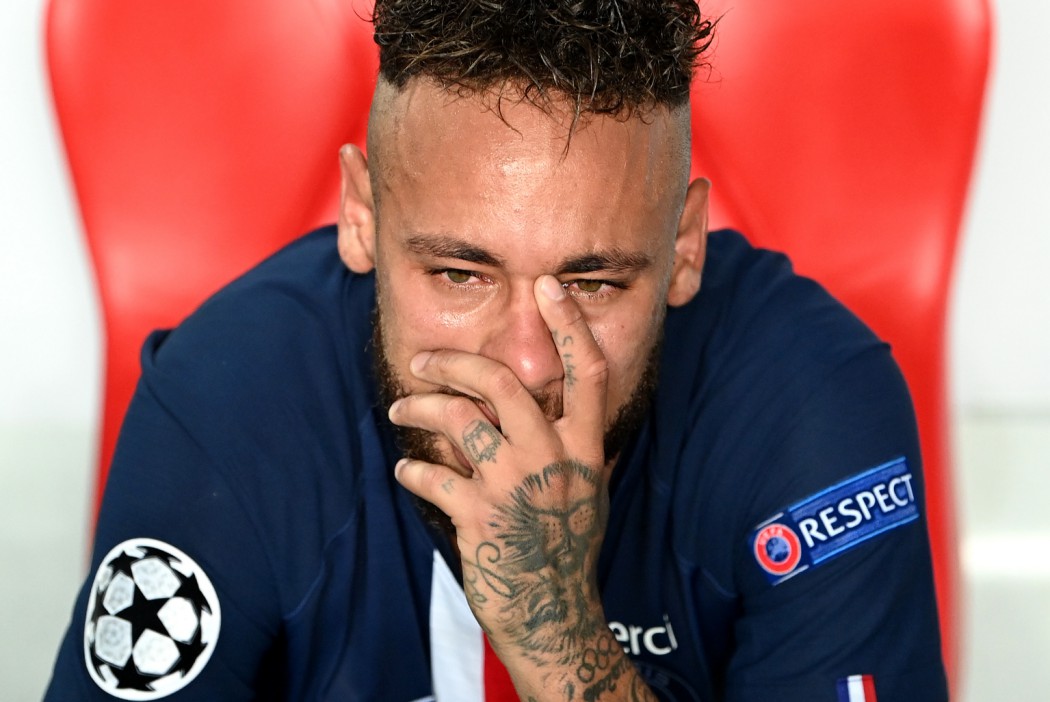 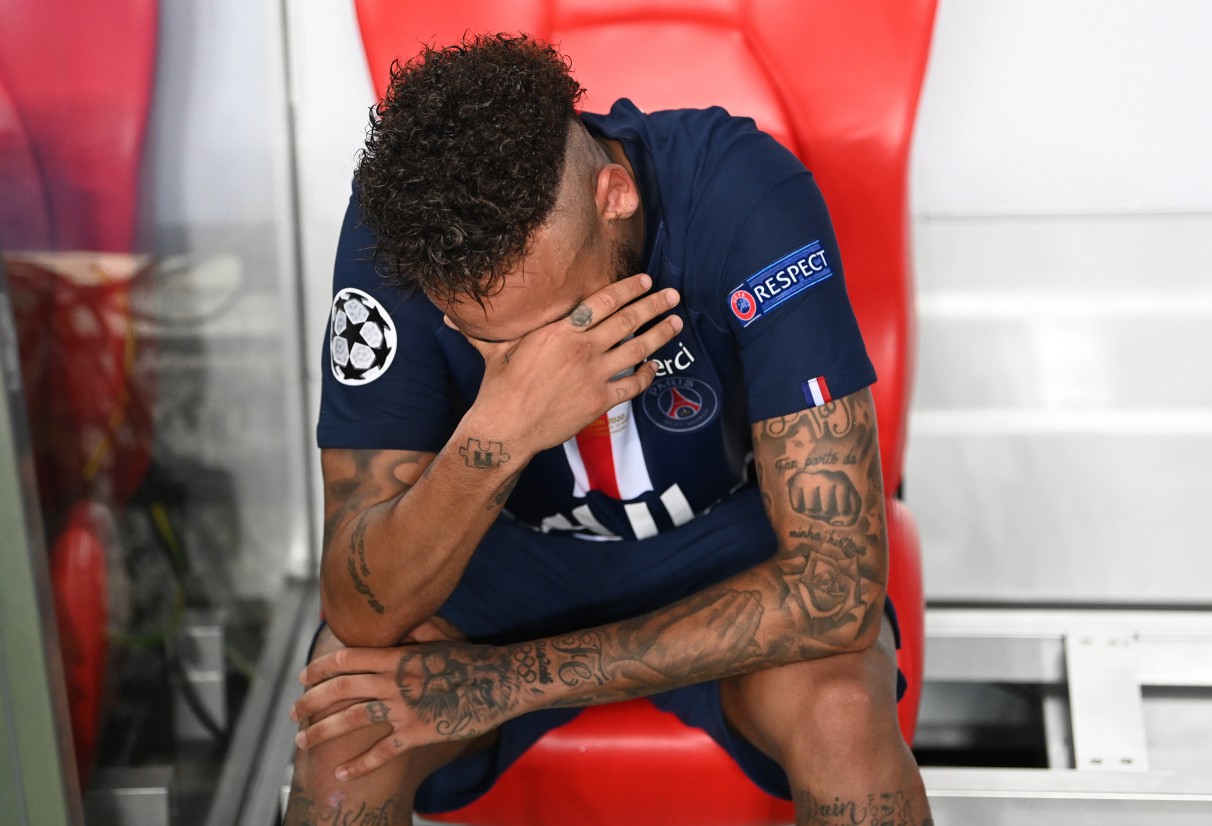 GLOVES ON THE TROPHY

Manuel Neuer is the first goalkeeper to lift the Champions League trophy since Iker Casillas in 2014. 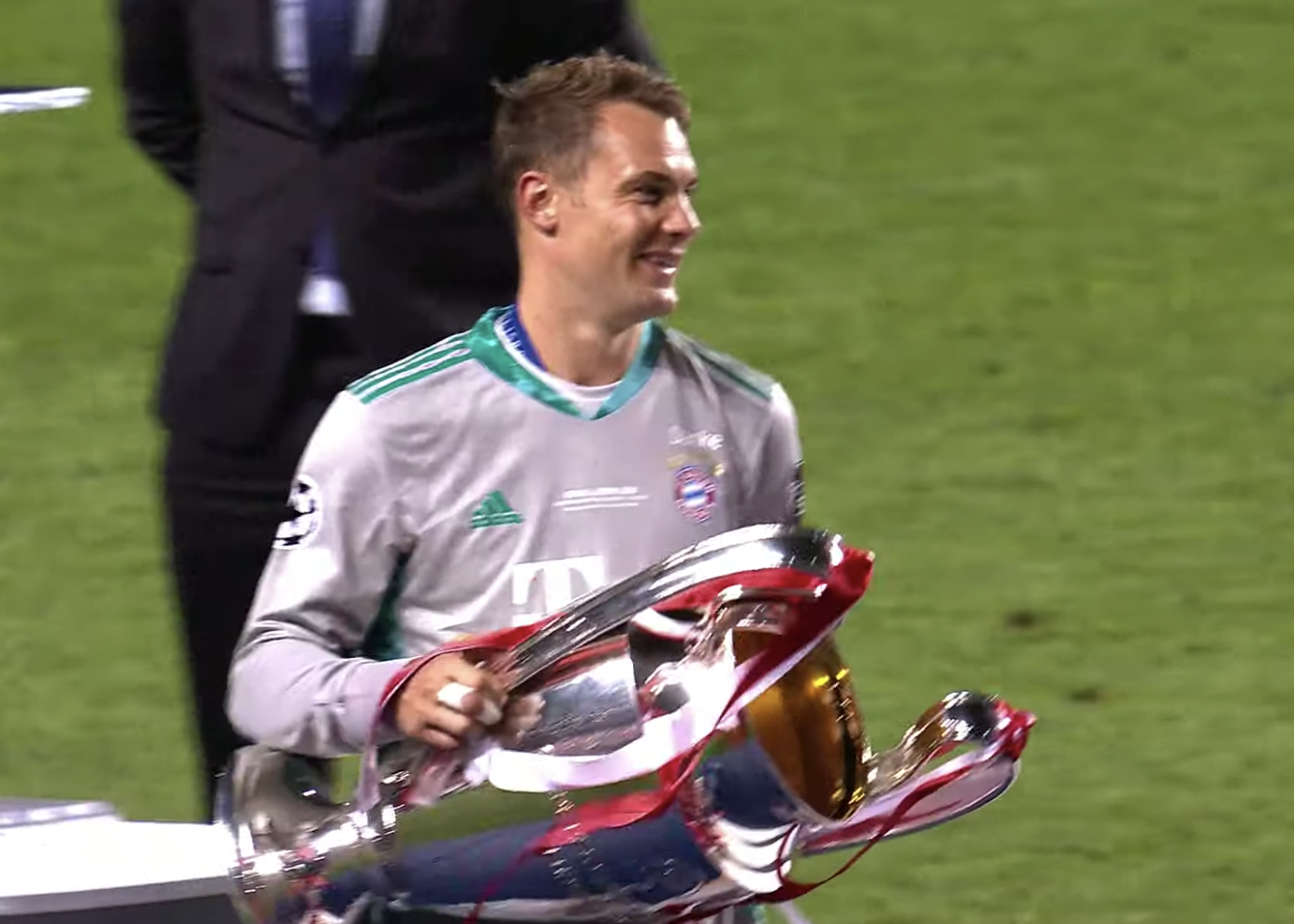 Kingsley Coman has won 20 major trophies in his career so far, averaging a trophy every nine matches!

THERE GOES THE TROPHY

Bayern Munich are the Champions of Europe. 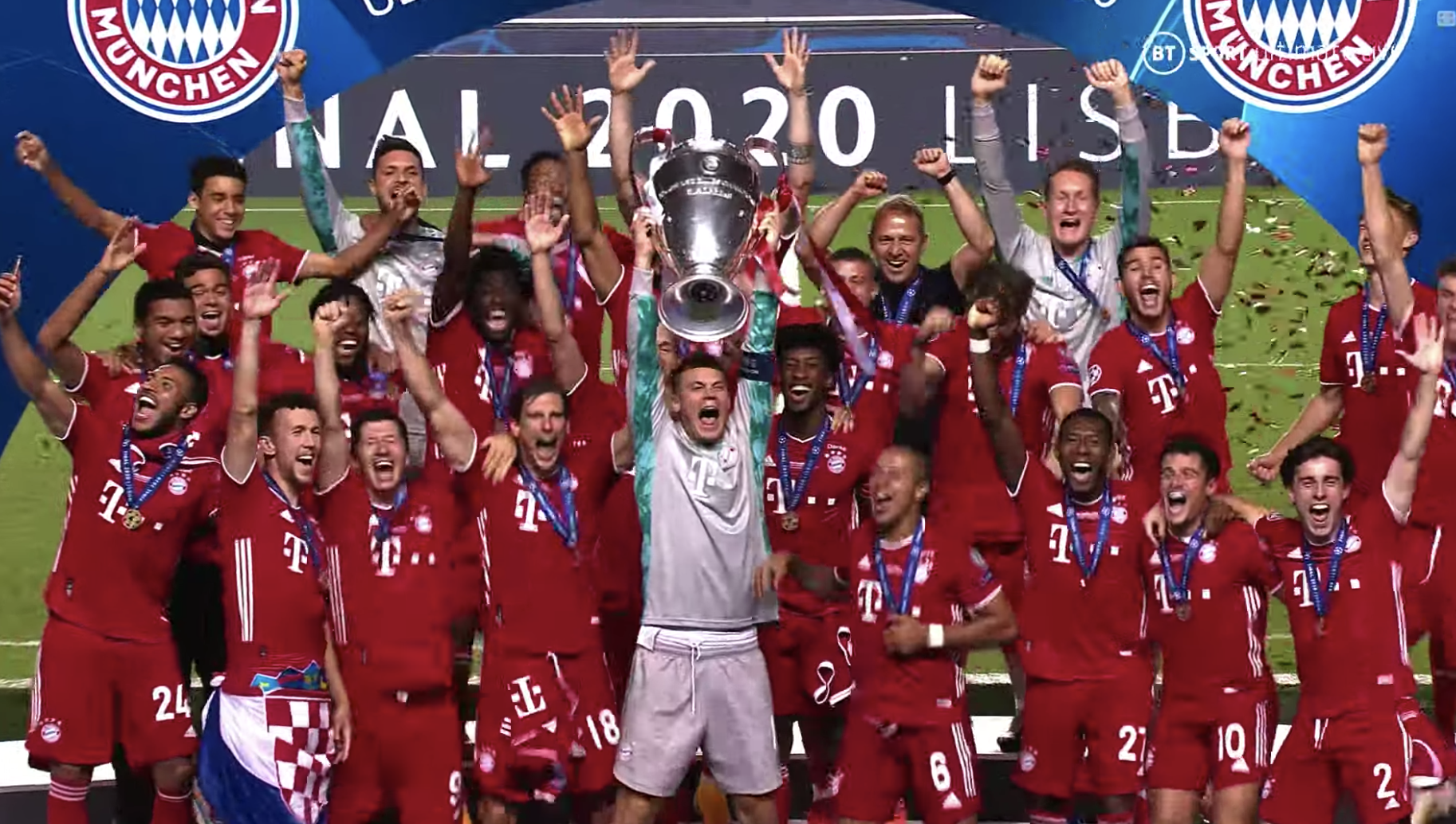 Neymar didn’t quite have impact he and his team would have hoped, he has failed to convert from his last fourteen shots in the competition.

Bayern Munich controlled the game from minute one, PSG had their moments but it was one moment of class which separated the two sides. 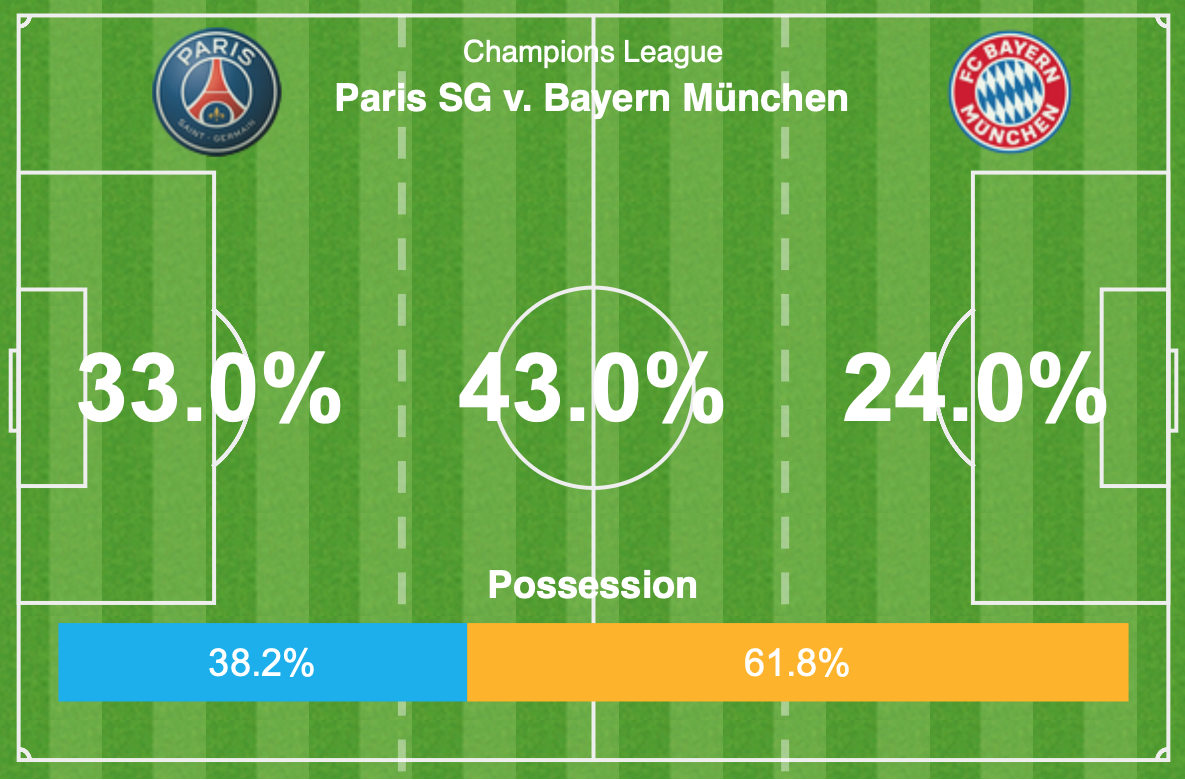 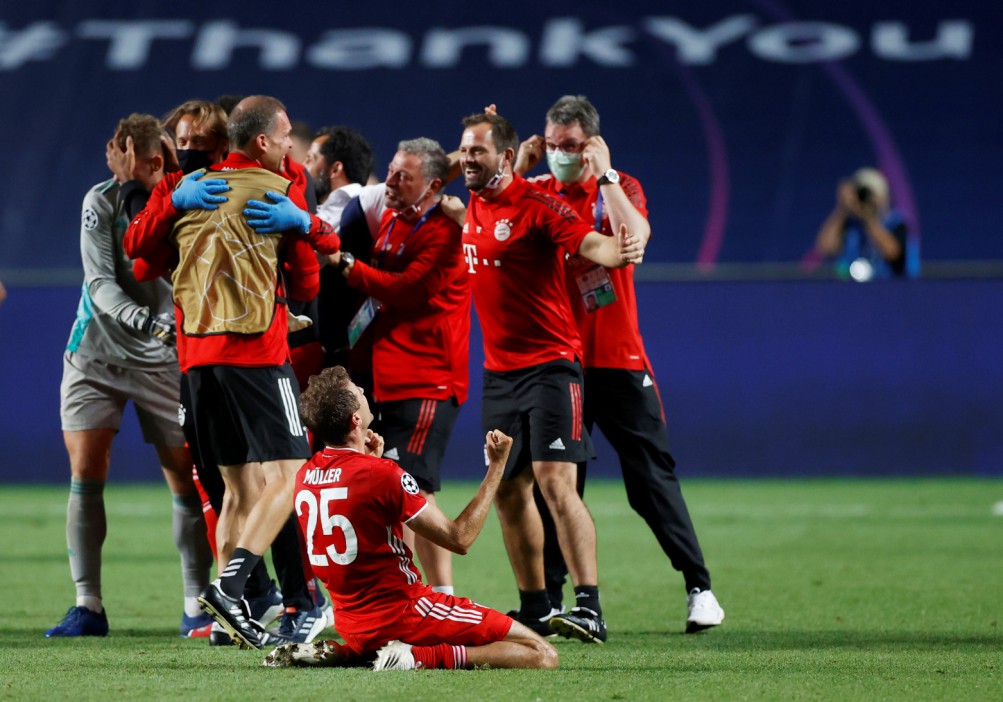 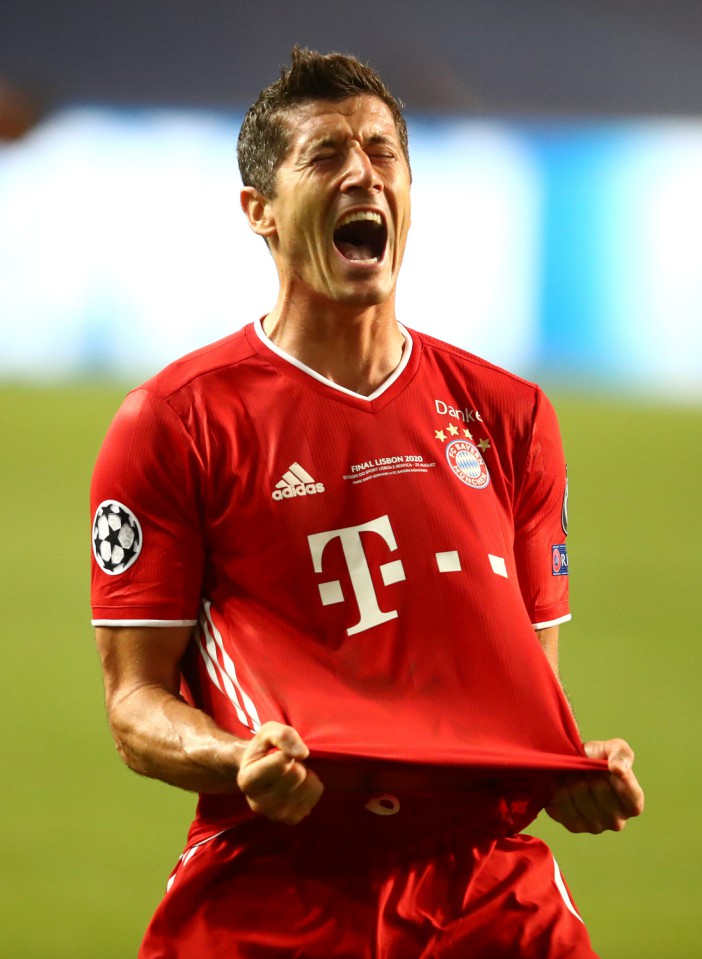 There goes the Germans’ names on the European Cup. 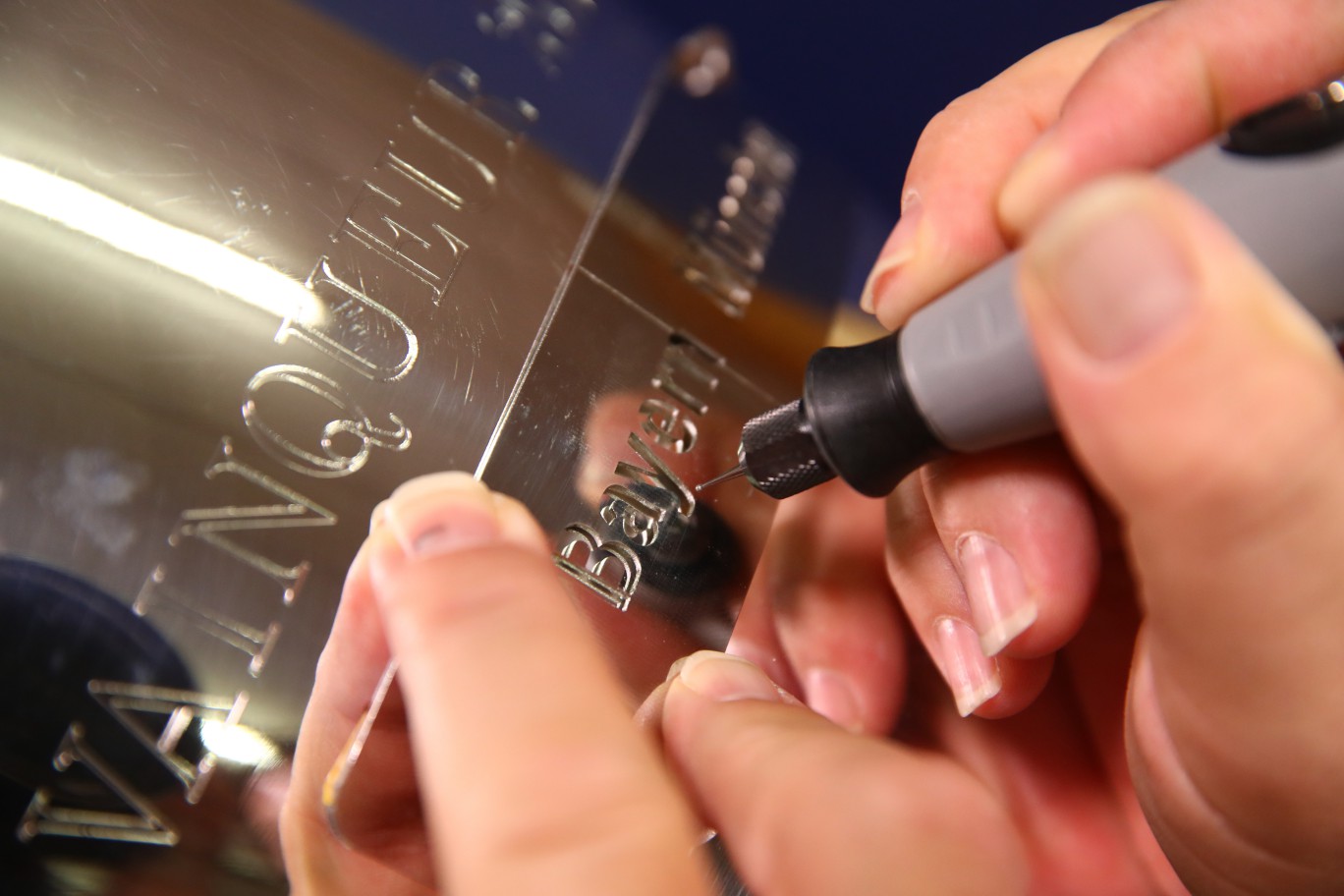 A BIG call for Hansi Flick to bring him into the starting XI #UCLfinal pic.twitter.com/r3xMX3t3hr

PSG last failed to score in a game in a major UEFA European competition in April 2016 vs Man City (0-1), had scored in previous 34 since then.

It’s a second treble in seven years for the Germans. 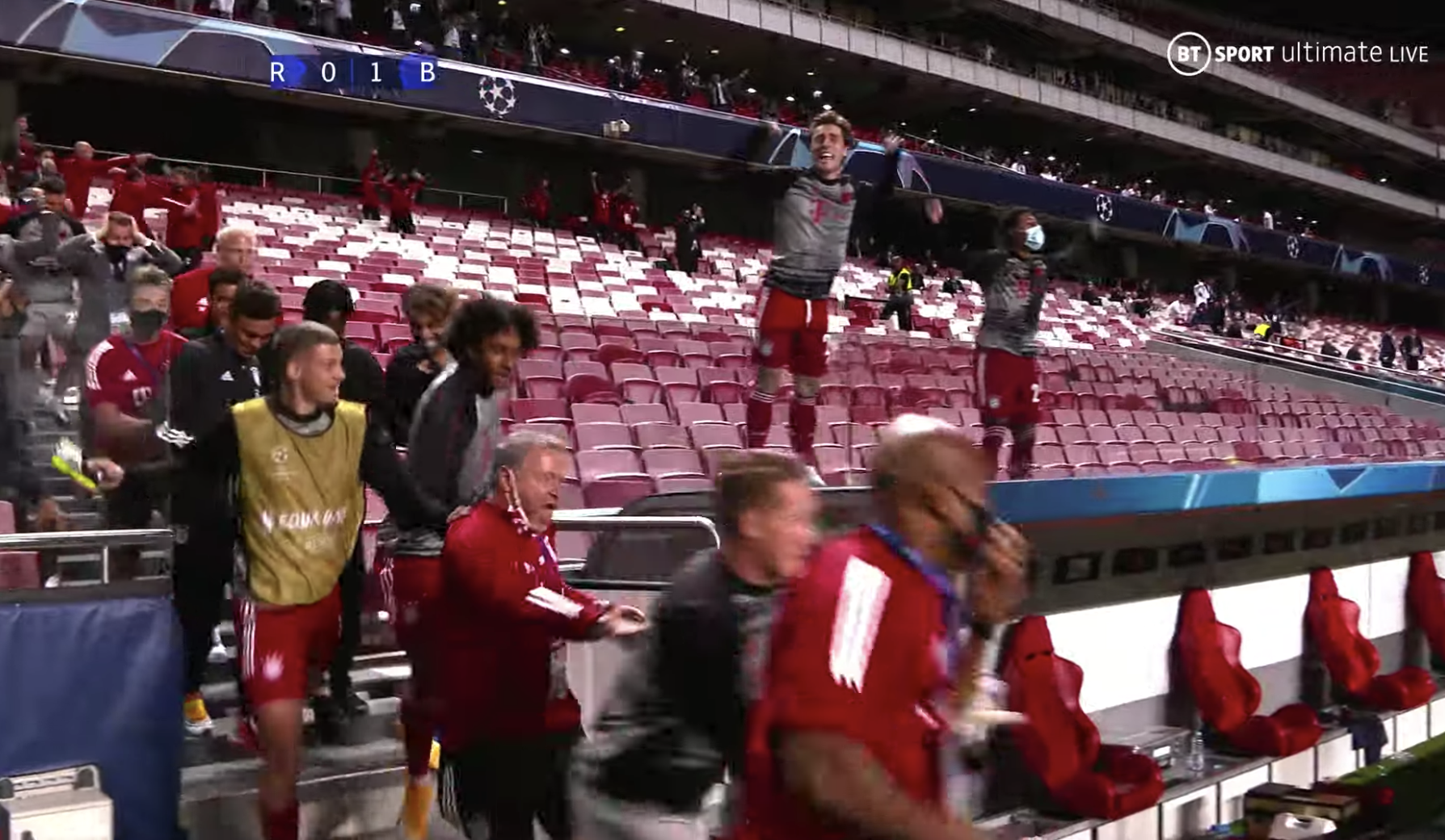 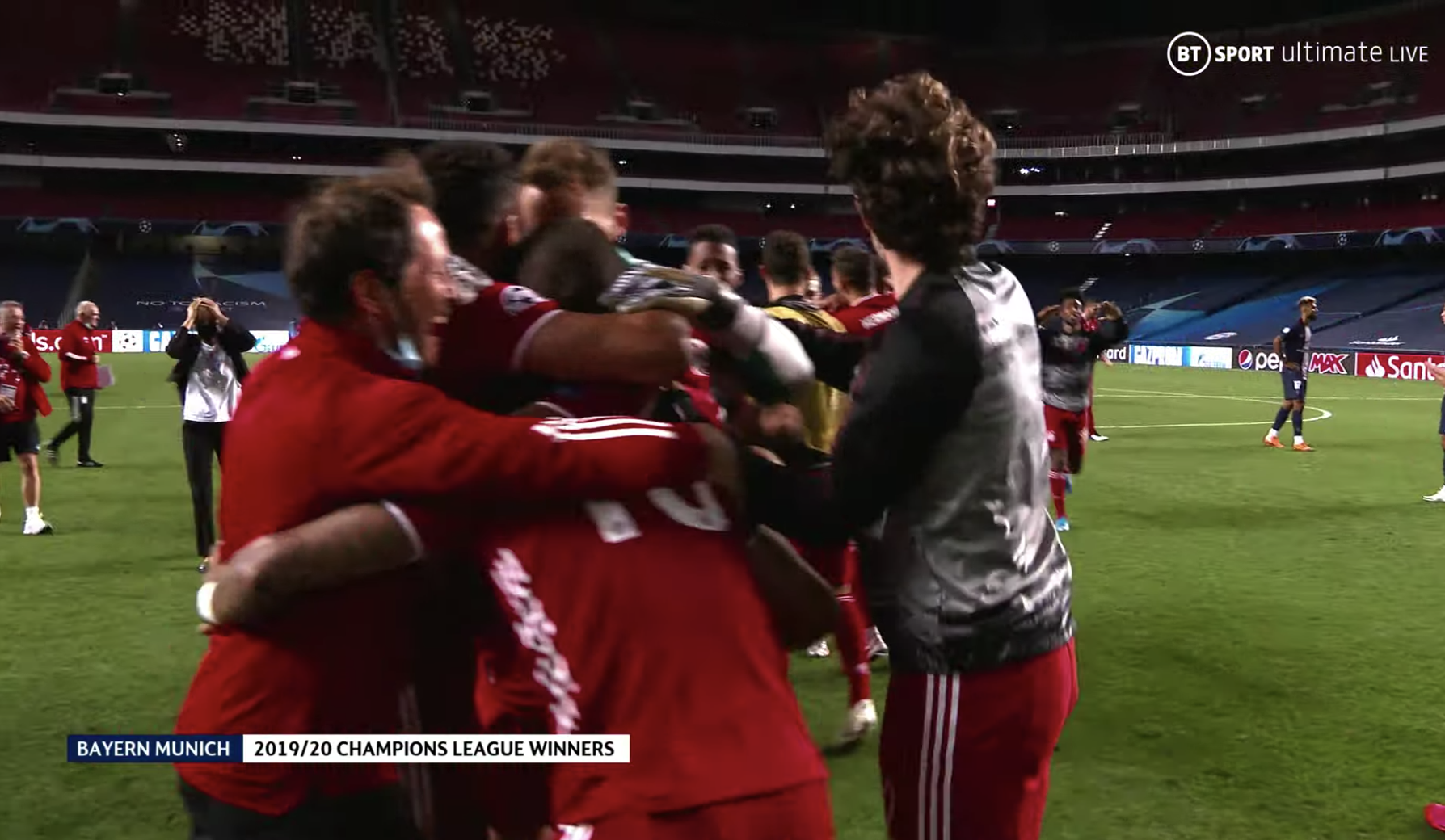 Bayern Munich are the first team in European Cup/Champions League history to win every game en route to winning the competition.

MAN OF THE MATCH

David Alaba is giving Neymar a huge hug and talking in the Brazilian’s ear.

He has been poor tonight. 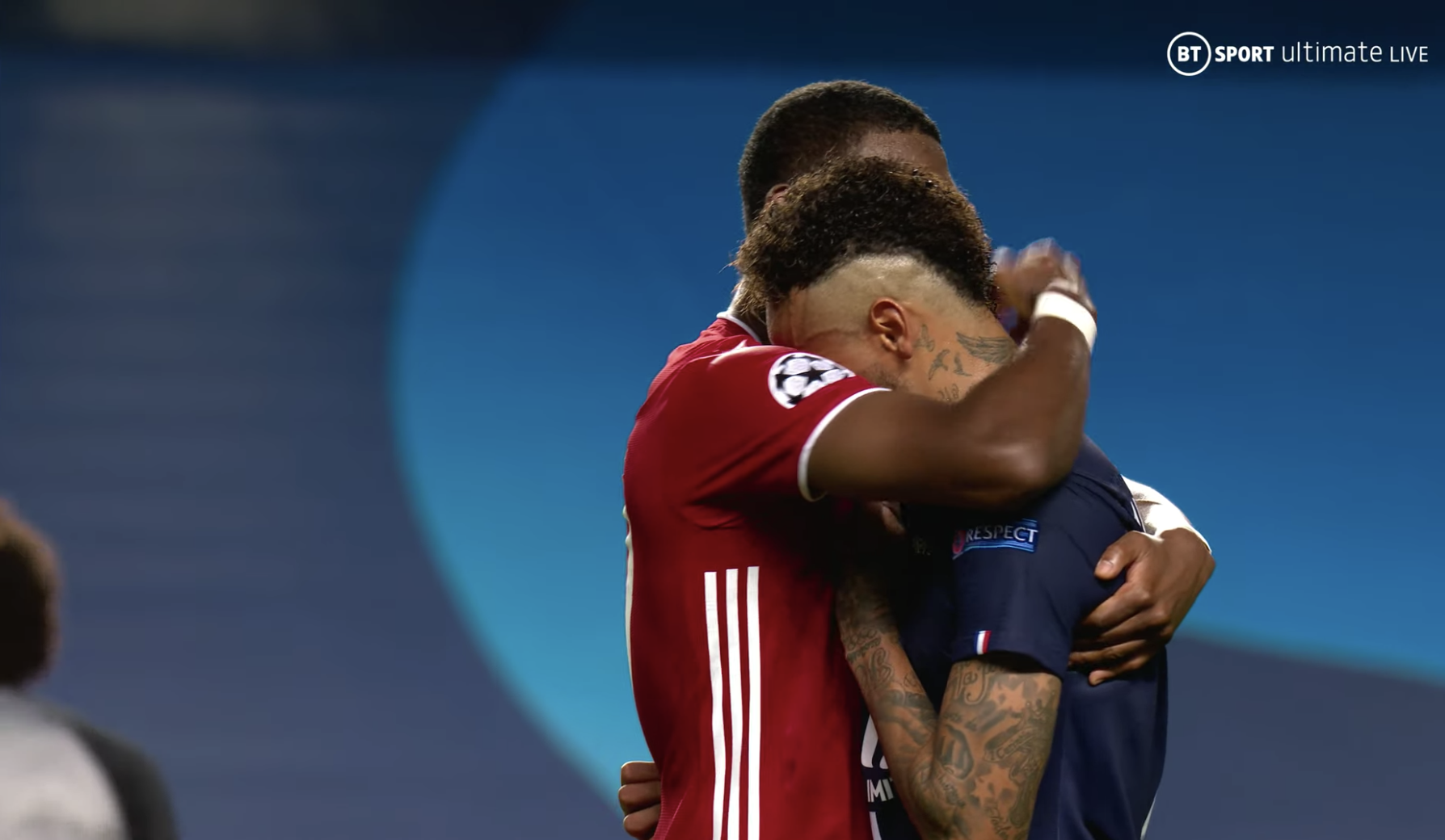 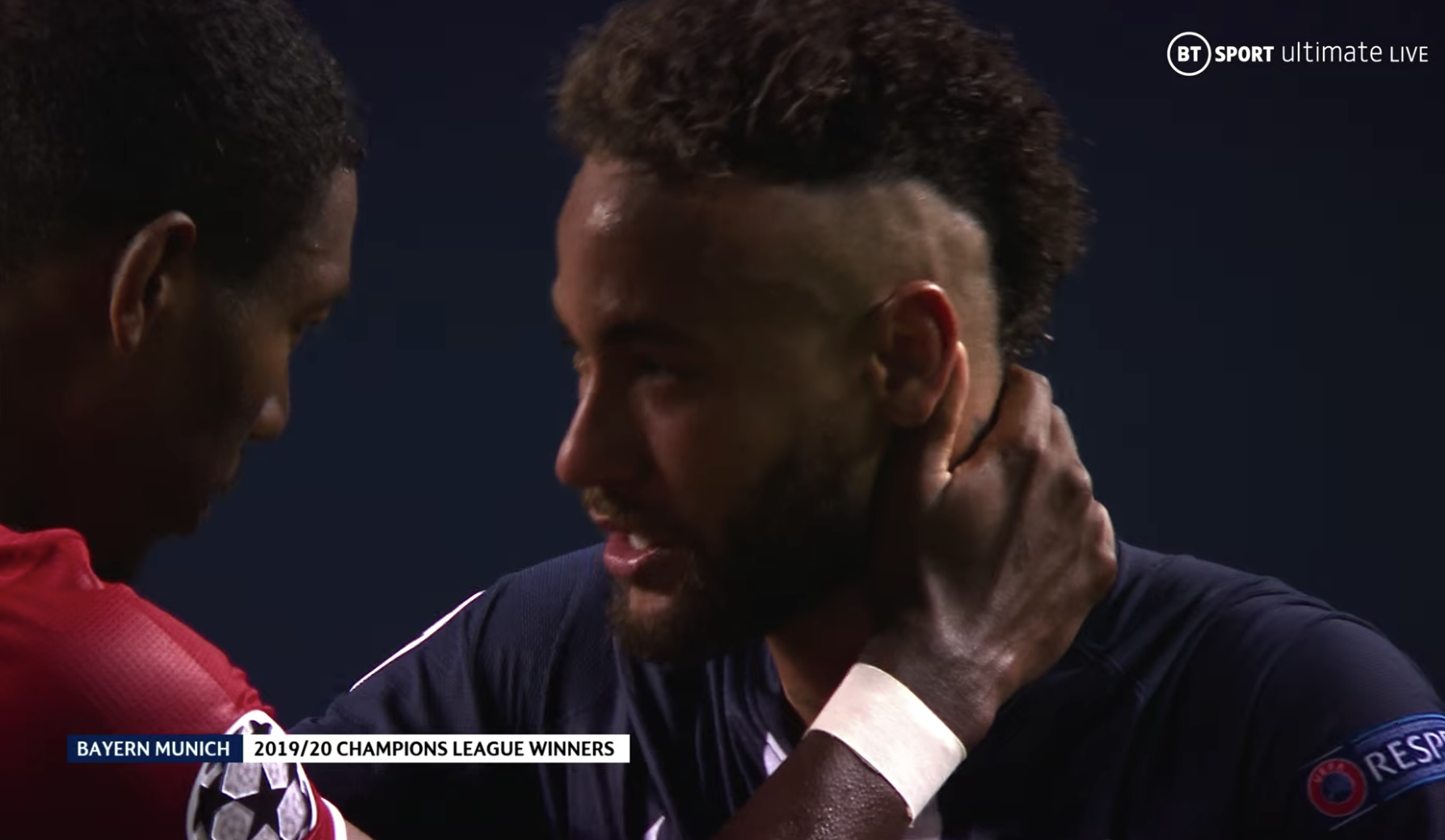 BAYERN MUNICH ARE CHAMPIONS OF EUROPE FOR THE SIXTH TIME!

90+3. Neymar leads the counter attack, he drives towards the box and delivers a wonderful ball across goal towards Choupo-Moting.

Davies does well to get in front of Choupo-Moting and he draws the foul, Muller is booked as he protests an earlier foul on Coutinho.

90+2. Lewandowski wins a free-kick deep inside the PSG half, Kimmich and Coutinho are standing over it.

90+1. PSG go up the other end after Lewandowski has a penalty appeal turned down, Mbappe feeds Neymar inside the box who turns and shoots, Choupo-Moting tries to get on the end of it but the ball bounces just wide of the post!

YOU SHALL NOT PASS

Neuer has been class tonight. 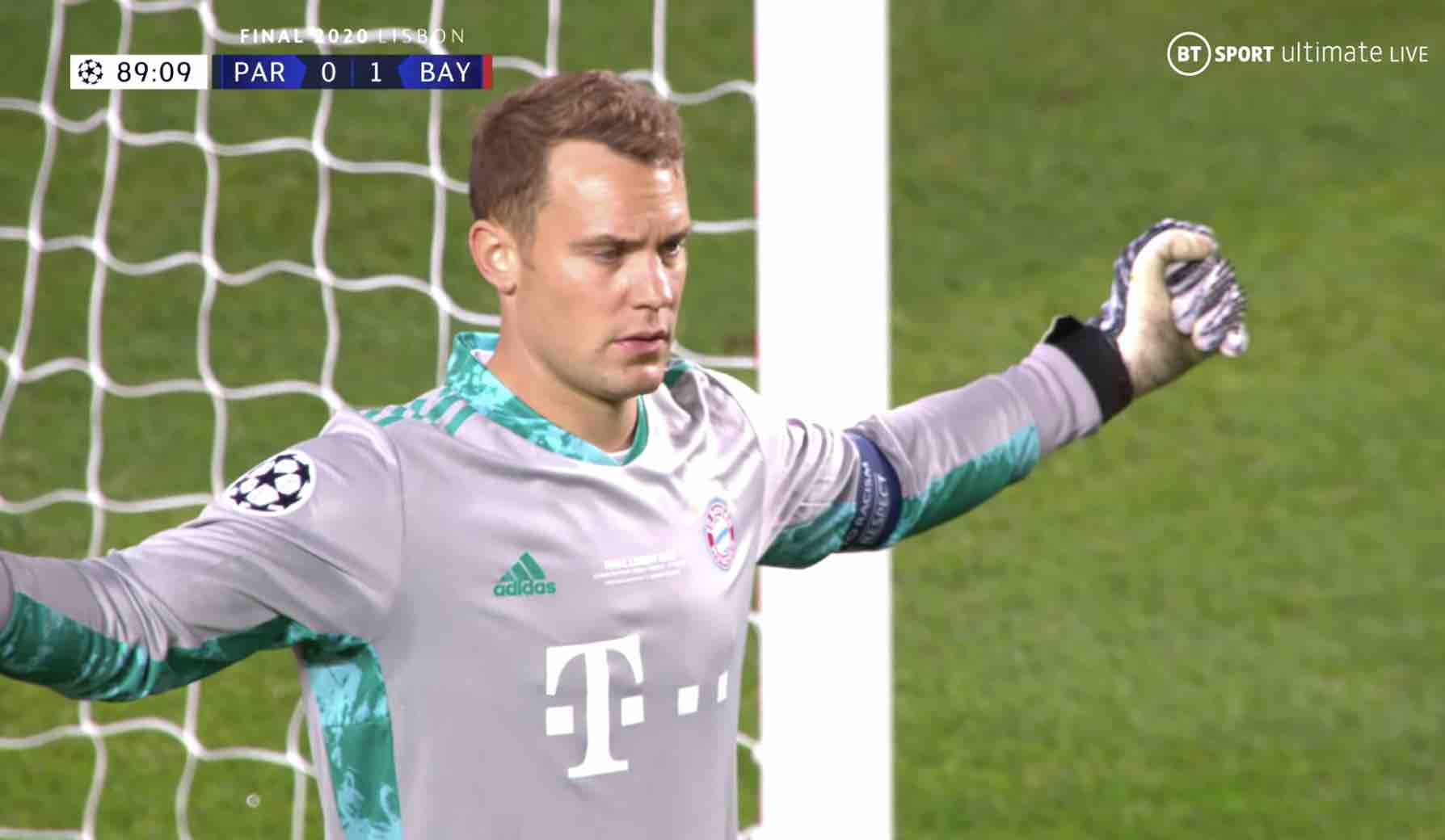 90. Five additional minutes to be played, the Bayern bench are out of their seats.

88. Mbappe has a shot from the penalty spot, one-on-one with Neuer and yet again the keeper comes out on top!

Luckily from Mbappe, the offside flag saves him from some embarrassment.

87. Neymar feeds Mbappe down the right wing, the Frenchman delivers a poor ball into the box.

It’s been a poor display from Mbappe tonight.

Thiago Silva hacks down Robert Lewandowski… and is only booked. 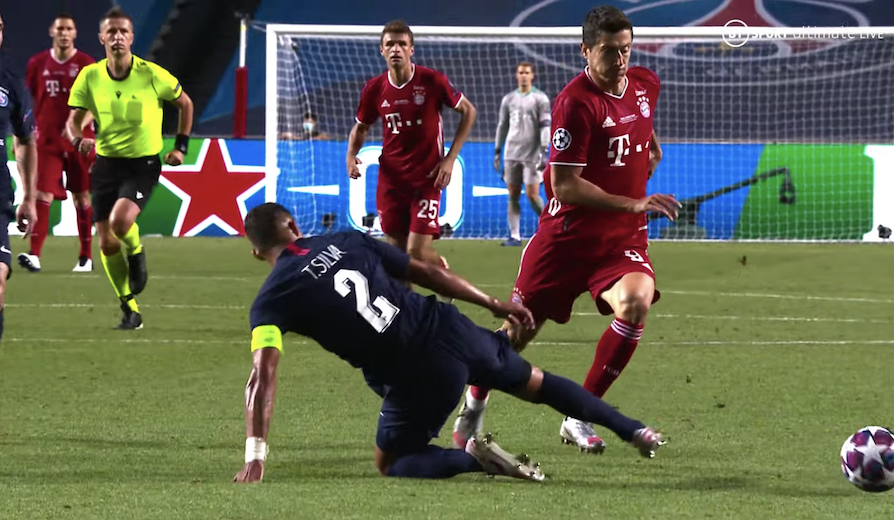 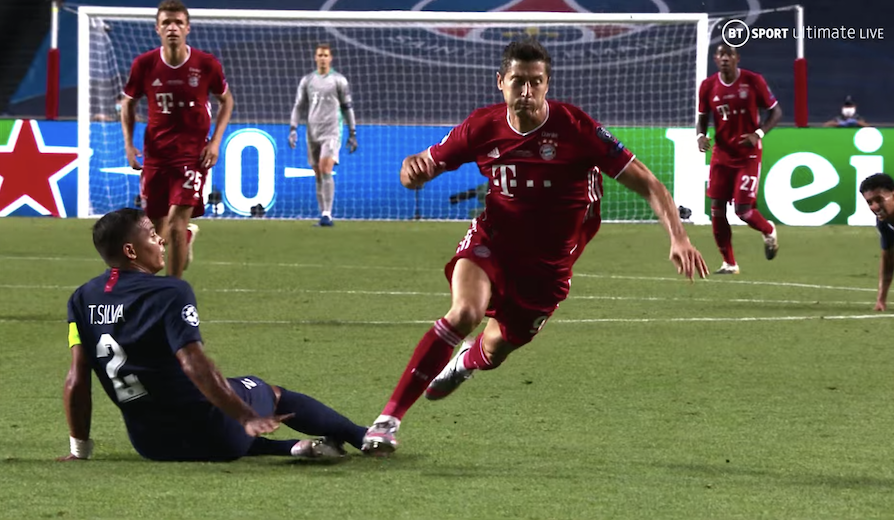