The Ireland scrum-half suffered a thigh injury a month ago against Leinster.

MUNSTER FULLBACK SHANE Daly will undergo scans on a thigh injury after being forced off during last weekend’s 40-12 pre-season victory over Connacht at Thomond Park.

23-year-old Daly, who has been impressive in the number 15 shirt since the restart of rugby last month, will now miss Saturday’s Guinness Pro14 2020/21 season opener away to Scarlets in Wales and it remains to be seen how long he will be sidelined for. 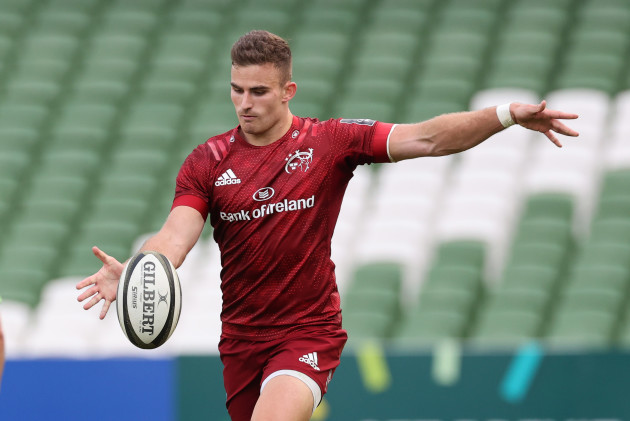 Daly has impressed at fullback for Munster.

Ireland scrum-half Conor Murray is also set to miss the trip to Wales as he remains out of action with the thigh injury he picked up in the 2019/20 Pro14 semi-final defeat to Leinster a month ago.

Murray being sidelined is likely to mean 21-year-old prospect Craig Casey will start at scrum-half for Munster against Scarlets this weekend and he will hope to signal his potential once again.

Meanwhile, Munster have also confirmed that loosehead prop Dave Kilcoyne remains on the comeback trail due to his ankle injury. Again, Farrell will be hopeful that Kilcoyne can recover swiftly.

His fellow loosehead, Liam O’Connor, has picked up a calf injury in training and will “be managed by the medical department.”

Andrew Conway is back in full training having completed his return-to-play protocols after a head injury during the semi-final defeat to Leinster.