The Ulster wing’s performance was up for discussion on the latest episode of The42 Rugby Weekly Extra.

AS OFTEN TENDS to be the case after big Ireland and Ulster games, Jacob Stockdale was in the limelight yesterday as the northern province lost to Toulouse in the Champions Cup quarter-finals.

The 24-year-old delivered a poor performance as his province were beaten 36-8 in France, with Stockdale moving from the left wing to fullback after first-half injuries and delivering a string of errors.

On today’s edition of The42 Rugby Weekly Extra – an analysis podcast available to members of The42 every Monday – Stockdale’s display came up for discussion as Eoin Toolan and Murray Kinsella dug into Ulster’s defeat.

Eoin, who previously worked with Ireland and the Melbourne Rebels and is now an assistant coach and head analyst for the Kintetsu Liners in Japan, felt Stockdale had failed to provide the kind of performance Ulster needed from one of their key men.

Stockdale, who has scored 13 tries in 28 Ireland caps, made handling errors and poor decisions, while he was beaten on his inside shoulder by Cheslin Kolbe for both of the Toulouse wing’s tries, the second of which Eoin felt showed the Irish wing’s defensive frailties.

“I thought he did get caught on his heels for that second Kolbe try and he’s really got to dictate to Kolbe where he goes,” said Eoin.

“By staying a little bit square, he gives the option for Kolbe to cut back on his inside and I think he needed to be a bit more directive and keep coming forward on Kolbe and just show him the outside and back his pace in a five-metre space to be able to shut him down.

“I thought that was a poor moment for him and his defence is a huge weakness for him. His defensive stats are at 62% for the Heineken Cup this season which is well below the standard for an international winger and it’s an area of his game he’s going to have to improve on.

“He’s obviously playing the best of the best in Cheslin Kolbe but I thought it was a poor game from him.

“You talk about star players trying to stand up for your team in a big game and Ulster have very few internationals in their team, Stockdale and Iain Henderson being the only two guys, Rob Herring as well, with those starting aspirations for Ireland at the moment.

“His defensive vulnerabilities are frustrating but also his unwillingness to take the game by the scruff of its neck and run those support lines. He does poorly not to execute a 3-on-1 down the right edge in the first half and there’s definitely a linebreak opportunity there. Also just going hunting for the ball. 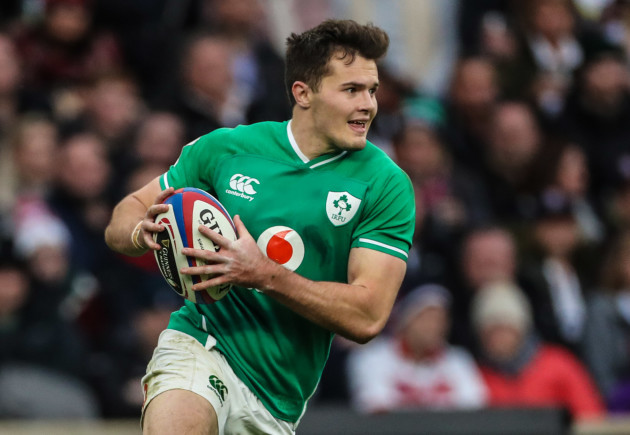 Stockdale was won 28 caps for Ireland so far.

“In the second half, there’s a midfield scrum, again a poor Ulster starter play and he goes down the right edge and, even though the positions have been changed all over the place at that stage, he gets turned over on first phase.

Today’s episode of The42 Rugby Weekly Extra also saw the lads digging into Leinster’s defeat to Saracens in detail, as Eoin highlighted a lack of variety in attack from Johnny Sexton and co., the quality of Sarries’ scouting, the aerial battle, scrum penalties, and whether English teams are overpowering Irish sides.

There was plenty more discussion on Ulster’s performance too, including their big missed chances and Michael Lowry’s promising showing at out-half, while Eoin outlined how the Brumbies secured the Super Rugby AU title Down Under.

You can sign up as a member of The42 here in order to listen to the extra rugby podcasts and a wide range of other shows on sportswriting, football, GAA, and coaching, as well as getting weekly newsletters and access to our lively member-only Whatsapp groups.