Bryan McLoughney’s goal clinched a 1-28 to 3-20 success over Loughmore-Castleiney after extra-time in Thurles.

KILADANGAN HAVE DREAMED of landing a county senior hurling title in Tipperary but scarcely could have imagined it arriving in such dramatic fashion this afternoon. 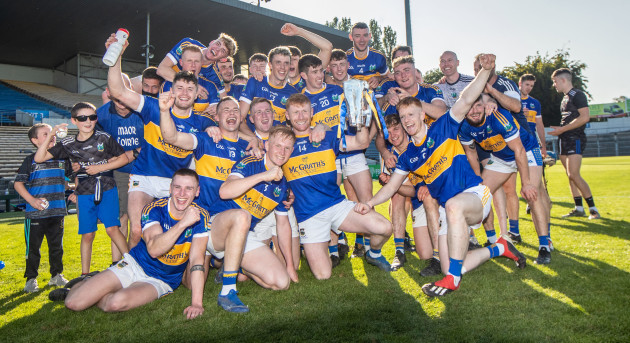 On a sun-splashed day in Thurles, a riveting encounter unfolded under a perfect blue sky.

It seemed as if Loughmore-Castleiney’s remarkable season would secure hurling silverware when John McGrath pointed a ’65 in the 81st minute of a marathon encounter. But the alert Barry Hogan immediately launched a long puck out from his Kiladangan goalmouth where it was fetched by Joe Gallagher.

He managed to offload to Bryan McLoughney – who started the game, was brought off in the 44th minute and then came back on in the 74th minute in extra-time. Rather than tapping over the levelling point, the forward went for broke and smashed a piledriver to the net. The final whistle sounded moments later, those two late scores in that pulsating finale occurring 13 seconds apart. Ecstasy for a delirious Kiladangan team, agony for a heartbroken Loughmore outfit. 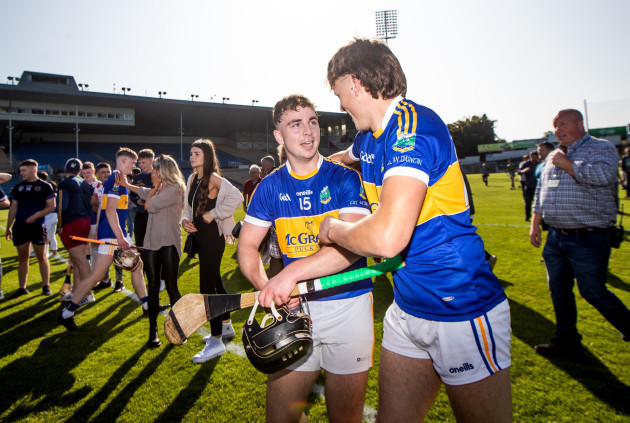 It was a brilliant contest in the battle for the Dan Breen Cup. The two final points before extra-time was confirmed captured the high standard on show and the level of drama served up. Paul Flynn launched over his sixth point of the game, Kiladangan’s third in a row in injury-time, for what appeared to place them on the cusp of a historic success.

But when Loughmore needed something inspirational, Noel McGrath provided it. Gathering under pressure on the left wing and striking from a standing position with one fluid movement, he swung over a glorious levelling point. It stood at 3-14 to 0-23 then.

The eventual defeat was rough justice on a Loughmore team that had terrific performers in the McGrath brothers – John with 1-10 and Noel scoring 0-5 – while Brian’s influence grew as the game progressed. Their star turn was centre-back John Meagher who gave a colossal display with his strength in the air and constant relieving clearances. Joseph Nyland also showed up well with his industry at wing-forward. 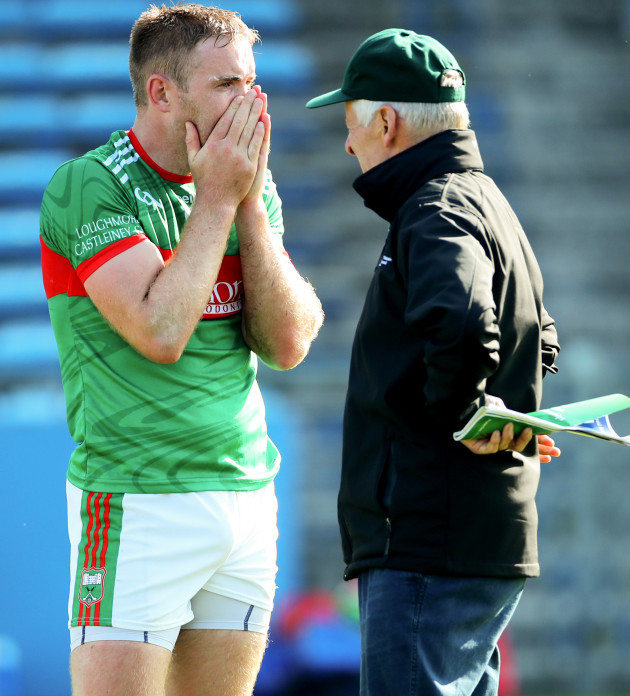 A dejected Noel McGrath after the game

Kiladangan had their own leading lights. The Flynn twins, Alan and Paul, were immense. The former shooting over 0-3 from wing-back, the latter bagging 0-7 from a roving role in attack, all of those clipped over in open play. Sean Hayes chipped in with 0-4, free-taker Billy Seymour finished with 0-8 to his credit and then McLoughney made his mark with 1-2 in the second half of extra-time. James Quigley was a really solid presence in defence although John McGrath made his mark noticeably when shifted in to full-forward. 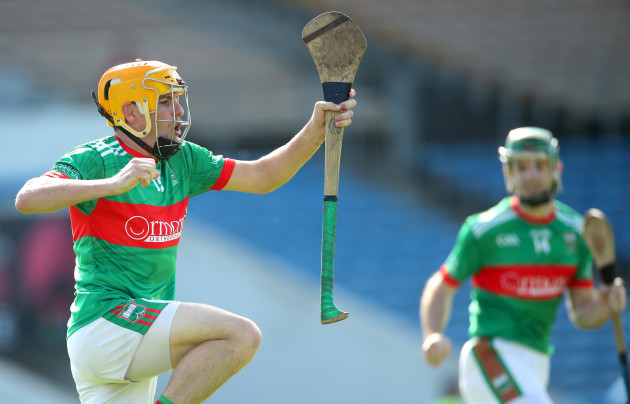 Loughmore’s teamwork in the first half was a joy to watch as they prised apart Kiladangan’s reaguard for three goals. Six minutes in and Evan Sweeney fired home the first after Ciaran McGrath had done wonderfully to release possession.

Then there were 19 minutes gone and Tomás McGrath knocked in a strike after Noel McGrath turned over David Sweeney before splitting the defence apart.

And the pick of the bunch arrived three minutes later with Sweeney and Ciaran McGrath demonstrating the vision and team play to offload handpasses with John McGrath the beneficiary as he drilled home a strike.

But Kiladangan were still heartened at the break by the manner in which they closed out the half. They struck four of the last six points before the interval as they gained a foothold in defence. It was a productive spell that was required with Kiladangan shooting ten first-half wides, dropping another shot short and goalkeeper David Kennedy beat away a fierce drive as well from Billy Seymour.

It was 3-5 to 0-12 in Loughmore’s favour at half-time before Kiladangan began to play in a commanding fashion as they outscored their opponents 0-5 to 0-3 in the third quarter. The action ebbed and flowed from there, Loughmore pushing ahead 3-12 to 0-19 with four minutes left on the clock in normal time.

Then Kiladangan produced a scoring surge that saw them overhaul their opponents and captain Flynn knocked over a point that looked the winner. Noel McGrath intervened and a rollercoaster extra-time period ensued before McLoughney had the final say.