‘I was like, ‘What is this bulge coming out the side?’ My shoulder was hanging to my knee’

Phil Healy talks to The42 about suffering a dislocated shoulder and the 2020 National Athletics Championships.

IRISH SPRINTER PHIL Healy was doing some weight-lifting in her homemade gym over lockdown, when her coach came in to check on her. 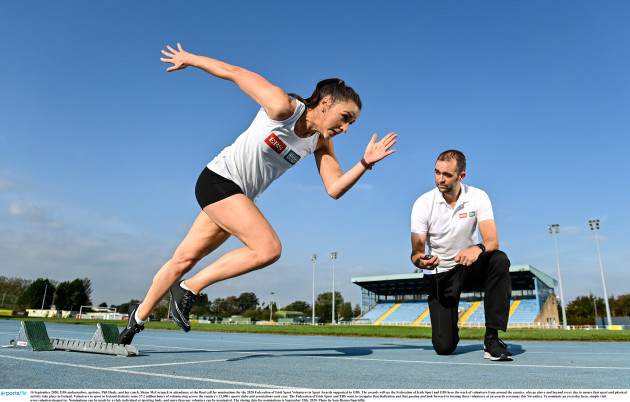 Phil Healy along with her coach, Shane McCormack.

Strength and speed are the twin peaks of her training regime. The Cork woman, or the Ballineen Bullet as she’s also known, divides her time equally between the gym and the track.

And when she suffers a setback with her strength, her speed deteriorates also. One system can’t function without the other.

Healy was in the middle of snatch lifts when that system broke down. Her coach Shane McCormack, who she was living with at the time, popped his head in for one of her reps just to make sure that she was doing the drill safely.

Healy was doing the work in a converted classroom in a Montessori school, which belonged to McCormack’s wife. Within seconds of that rep however, she could see that her shoulder was out of shape.

“I was doing a snatch, it was actually a snatch max,” she begins.

“And the bar went slightly over my head and reached too far. It [the shoulder] just popped on the way back down.

“It’s something that can easily happen. Again, it was a time of the restrictions so everything was difficult. I was doing a session on my own and Shane literally came in for that rep only, just to watch me because he knew it was going to be a max.

Otherwise, I definitely would have been collapsed on the floor by the time he came to see me.”

Given the pressure that the health system was under at the time due to Covid-19, both Healy and McCormack wanted to avoid going to a hospital.

Instead, they called Healy’s physios Conor McCarthy and Emma Galvin to see what they could do for her over the phone.

Galvin was the first to pick up and they continued the treatment over Facetime, where she helped McCormack through the process of popping Healy’s shoulder back into place.

And I was like, ‘what is this bulge coming out the side?’ My shoulder was literally hanging to my knee. So Emma picked up the phone and she was on Facetime to Shane. She showed him how to pop it back in. Obviously, again, we wanted to avoid hospitals and things like that.

“But at the same time, you wanted to pop it back in as quick as you possibly can. So we were doing that for about 10 minutes which is long enough. It took two goes but then it went in normally.

“I couldn’t see a physio for weeks after because of the restrictions so Conor [McCarthy] looked after me when everything opened back up and made sure everything was strengthened up properly to prevent it popping again.”

Healy had to find ways around her injury to maintain her training. While she wasn’t putting pressure on her arm, a runner relies on rhythmic arm movements to propel them forward.

So with her arm now in a sling, Healy was forced to get up on the bike. Single leg gym work was part of her altered training programme too. Two weeks later, she was back on the track, and has since picked up the 100m and 200m gold medals at the Irish National Track and Field Championships.

That brings her total tally of senior national titles to 12.

“The pain actually wasn’t bad at all,” she says, reflecting on that injury spell.

“I fell on it in winter of last year and the pain for the following days was far worse so it was sore for a few days but nothing major.

“It’s perfect now. There is no damage done and Conor has been monitoring it throughout the summer. But there’s no pain.” 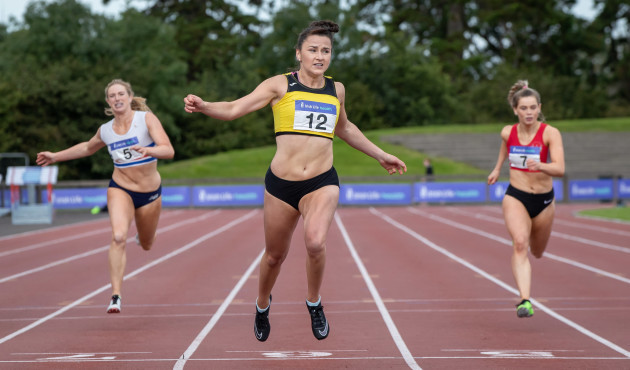 Healy after winning the 200m final at the National Track & Field Championships in August.

The National Championships brought a huge boost to Healy’s season. Her last run out was at the National Indoors in February, and after months of inactivity, it was a relief for her to able to compete again.

The decision to stagger the championships out over two weekends also enabled her to contest the 100m and 200m events.

The latter distance is normally her specialty but with the Olympics postponed amidst a disjointed season, this is the year to take advantage of any opportunity where you can be tested.

“It was great they went ahead and that we had that opportunity to race,” says Healy about the National Championships.

“A credit to everyone that made it happen with the restrictions and that they had a plan in place. It was actually so well organised and everything was really smooth.”

“If it wasn’t over the two weekends, I couldn’t do the 100m and 200m. I had the national indoors in February and then it was a long wait to the national outdoors so I would have been really rusty.”

She almost didn’t enter, still hurting from a previous race where she felt she didn’t perform. Knowing the work she had already put in this season, Phil refused to let her sister withdraw from the race.

Sibling attachment is obviously a factor here, but it was also a case of one athlete intervening to help another. The pair had always helped each other along through problematic times in their athletics career.

In a strange year when people rely on kindness more than ever, this was Phil’s turn to step up.

“Joan had a race in Cork where it didn’t go to plan,” she begins.

“And I was like, ‘not every race will go to plan’. I knew the potential that she had but that it just didn’t work out that day. So from looking from the outside, I convinced her to race in the nationals.

“Her and her coach had pulled from the nationals as such but I was just like ‘enter, you have two more weeks to train, you don’t want to be sitting at home watching on tv knowing that you could be a finalist, you could be a medallist.’

“Take away that from the summer that you had the resilience to do it.

She was delighted that she did it and that she has a national medal to show for this year and that she didn’t…as I said to her, ‘you don’t want to be a soft athlete’, you want to have that resilience and test yourself.”

Irish sprinter, Phil Healy, and volunteer Shane McCormack, were on hand today to launch the final call for nominations for this year’s Federation of Irish Sport Volunteers in Sport awards, proudly supported by EBS.

Nominations for the awards will close on 25 September, with clubs, individuals and sporting bodies all being urged to nominate their local everyday hero to give them the opportunity to be recognised by the Federation of Irish Sport and EBS at the 2020 Volunteers in Sport Awards on November 16th.