Danny Byrne was found in breach of the Code of Conduct under the Local Government Act by Dublin City Council. 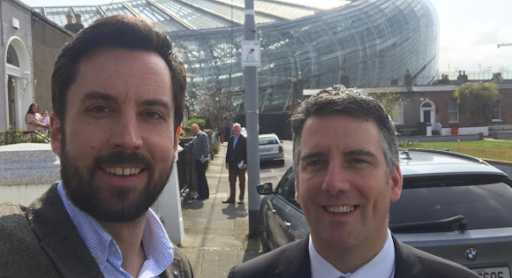 A FINE GAEL councillor has said he “erred” in his judgement and has apologised after he was found in breach of the Local Government Act’s Code of Conduct for requesting that a HAP tenant be moved from a property he was trying to sell while acting as an estate agent.

An ethics investigation by Dublin City Council was carried out after Councillor Danny Byrne ‘gave the impression’ that he wanted the council to move the tenant out to facilitate the sale of the property, which he was looking after as an estate agent. Byrne says that he was solely trying to find alternative accommodation for the tenant to ensure he wouldn’t become homeless.

Following a report by TheJournal.ie, Byrne issued an apology while a Fine Gael spokesperson said the party “is currently considering the matter”.

Byrne, who was elected to the council last year, first contacted the council’s Housing Assistance Payment (HAP) section in June to enquire about a HAP tenant.

He told officials that he worked in property “and was trying to close a sale”, according to an email contained in an Ethics Report and seen by TheJournal.ie.

Byrne wrote that he would like the matter processed “ASAP”, emails show.

According to a subsequent Ethics Report following an official complaint, Byrne “made it clear that he was working in property and that he was seeking to expedite the closure of a house sale which was held up as there was a tenant in occupation”.

In a letter from Council Chief Executive Owen Keegan outlining the case states: “[Byrne] claims he did not seek to influence the HAP section” and that “he simply offered to help the tenant find alternative accommodation and he was concerned that the individual would be homeless if the HAP application was not processed”.

In his defence, Byrne argued that his enquiries were “humanitarian” and that he “was not to gain anything arising from the success or otherwise of that application”.

Byrne also stated, according to Keegan’s letter, that he had “indicated he was acting in a professional capacity as an estate agent” and that he was not seeking the transfer of official information.

He stated: “I fail to see how or where a conflict of interest arises. The HAP process had no bearing on my sale of the property in Tallaght and was in no way contingent on same.”

In his letter, Keegan said that while Byrne declared his professional interest in the closure of the property sale is relevant “it is not a full defence”.

Keegan stated that although it may have been a “benign request” to expedite the sale of the property, “it could be construed as an attempt to influence the HAP section”.

Keegan said an email dated 16 June from Byrne to the Council’s HAP section “gave the impression that his primary motivation was to facilitate the closure of the sale of the property.”

“This would have raised legitimate concern with City Council staff because at the time the emergency pandemic legislation protected most tenants from eviction,” said Keegan.

It’s understood that council staff were uncomfortable about the suggestion of moving a HAP tenant out of a property during lockdown despite Byrne putting forward an alternative property.

It was determined, however, that the tenant would not be in a position to afford the alternative property.

“It is also of interest that despite being asked to submit evidence from the tenant that he was authorised to act on his behalf, [Byrne] failed to do so,” said Keegan.

Following the complaint, Byrne was found in breach of Sections 4.9, 4.10 and 4.11 of the Code of Conduct contained within the Local Government Act and that he “failed to clearly demonstrate the required separation between his personal business interests and his role as an Elected Member of the City Council,” Keegan concluded.

The findings did not uphold the complaint that he was in breach of Section 177(4) of the Act, which relates to elected members seeking to influence a decision by a local authority in relation to a matter in which they have an interest.

Keegan said that, with regards Section 4.10, he “used his official position to benefit his business interests” and, regarding Section 4.12, “did not maintain proper standards of integrity, conduct and concern for the public interest in his dealings with City Council officials”.

“We accept there was no deliberate intention on his part to breach the Code. We also accept that Councillor Byrne may genuinely have believed he was acting in the best interests of the tenant.”

In response to queries from TheJournal.ie, Byrne issued the following statement:

“As the Dublin City Council outcomes states, there was no deliberate intention to breach the local Government code.

“I erred in my judgement and I am very sorry for this. I will learn from my mistake.

“I will be happy to take the opportunity to work closely with the Council, to ensure complete clarity regarding the application of the Code of Conduct.”