Matt Doherty and Seamus Coleman were both involved as Spurs began the season with a defeat at home.

EVERTON MADE A statement of intent that maybe this is the year they can crack the Premier League top six with an impressive 1-0 win at Tottenham.

Carlo Ancelotti has been backed in the transfer market as the Toffees finally try and compete at the top end of the division and Dominic Calvert-Lewin’s second-half header got them off to a winning start.

It was a slick and polished display that could have been rewarded with an even more handsome victory, had Richarlison been more clinical in front of goal.

Even still, this will have Everton fans dreaming as they completely outplayed their hosts.

It was an afternoon to forget for Spurs, who were well below par and will struggle to take any positives out of the game.

And on this evidence Jose Mourinho has a bigger challenge than Ancelotti on his hands to finish in the top six, especially considering his side have a gruelling schedule over the next couple of months.

Everton named new signings James Rodriguez, Abdoulaye Doucoure and Allan in their starting XI and they made a slick start, having a brilliant opportunity to go ahead in the 16th minute. 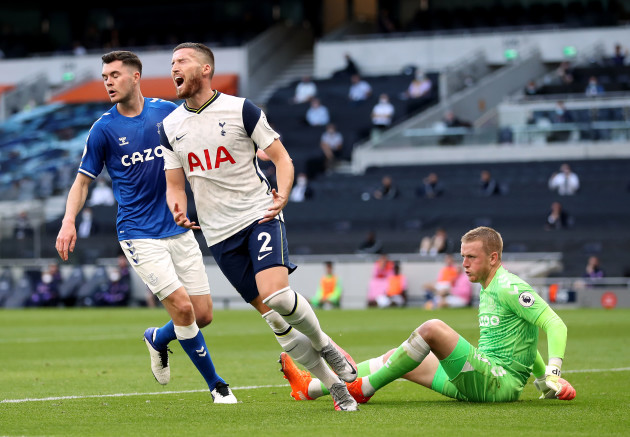 Matt Doherty reacts after missing a chance on his Spurs debut.

It may have been the opening weekend of the season, but Richarlison has probably already got one hand on the miss of the season trophy.

It was a huge let-off for Spurs, who had been pedestrian but did at least use their escape as a wake-up call.

They were inches away from taking the lead as Son Heung-min’s cross just evaded Harry Kane and drifted just wide before a brilliant counter-attacking move saw Son play in Dele Alli, but Jordan Pickford did well to produce a flying save.

James was having an encouraging debut and threatened at the other end as he flashed a 20-yard effort just wide, but it was Pickford that ensured his side went in at half-time on level terms.

Spurs debutant Matt Doherty foraged forward, played a one-two with Kane, whose delightful flicked pass played the Ireland international in, but Pickford produced a fine block with his feet.

The break came at a good time for Everton as they regrouped and took the lead 10 minutes after the restart.

Lucas Digne delivered a delicious free-kick, which Tottenham contested, and Calvert-Lewin powered home a thumping header to open his account for the campaign.

Richarlison was determined to do the same and twice found himself going within inches of doing so with identical chances.

His position wide on the left was causing Spurs problems and as he cut inside his curling efforts went just wide on both occasions with Lloris beaten.

Mourinho’s men chased the game but they failed to trouble Pickford and it was Everton who looked more likely, with Calvert-Lewin testing Lloris.

But one goal proved to be enough for a first win over Spurs in 16 games going back to 2012.

As Doherty made his Premier League debut for Spurs, Seamus Coleman, whom he has displaced from the Ireland team, played the full 90 minutes for Everton.