Debunked: The conspiracy theories around the so-called Hollywood drug adrenochrome

Theories claim adrenochrome is harvested from children in a trafficking ring.

THE CORONAVIRUS PANDEMIC has led to a surge in misinformation and conspiracy theories.

One of the most bizarre is the claim that celebrities and the ‘liberal elite’ have a secret child trafficking ring and that they extract a drug called ‘adrenochrome’ from these children.

The use of this drug has also led to a number of Hollywood celebrities catching the coronavirus, according to these conspiracy theories.

Where did it start?

Readers may remember the pizzagate theory from 2016 which claimed Hillary Clinton and others from Hollywood and the ruling elite were running a child trafficking ring.

One story centred around a Washington pizza restaurant called Comet Ping Pong, whose owner received hundreds of threatening messages. In December 2016 a man fired a gun inside the pizzeria, claiming he was investigating fake news.

Although this theory has been thoroughly debunked, it still lives on in certain parts of the internet – and it has evolved.

Through this evolution, the harvesting of ‘adrenochrome’ from children in the trafficking ring has been introduced. Adrenochrome, according to the theories, is a Hollywood drug, sometimes taken as part of a Satanic ritual.

Some theories claim that blood is drained from children who are kept at ‘farms’ and tortured. Adrenochrome is then extracted from the blood in a lab and sold to celebrities, or the blood itself is consumed, according to these conspiracy theorists.

Others claim the compound is harvested from an adrenal gland in the brain (adrenal glands are actually located above the kidneys).

So even those making the claims about adrenochome can not agree on how the extraction process or the method of taking the drug works.

Reports from conspiracy theorists often reference friends or sources who claim to have seen the extraction process firsthand or who have photographs of the children in torture camps that they refuse to publish in fear of their own safety.

Conspiracy theorists also claimed Tom Hanks contracted Covid-19 from a tainted batch of adrenochrome. Other celebrities such as Ellen DeGeneres, Heidi Klum and Michael Rapaport are accused by theses conspiracy theorists of being addicted to the ‘drug’.

In April this year a post published on Facebook accused Lady Gaga of “participating in vile, sickening rituals pertaining to adrenochrome and spirit cooking”. 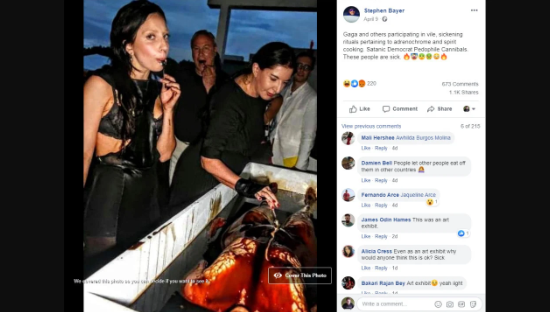 The photo is actually of Lady Gaga performing interactive art with artist Marina Abramovic at an exhibition in 2013. 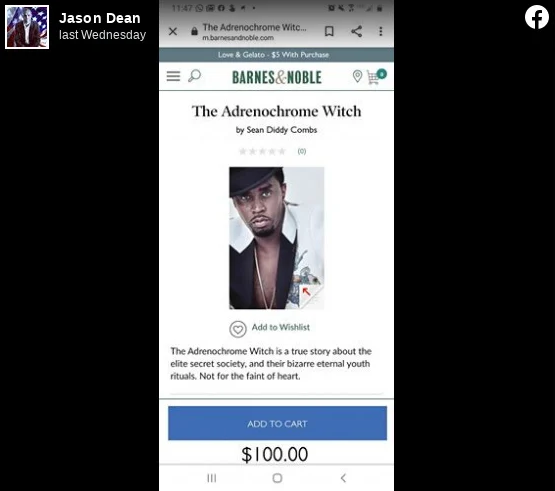 Social media posts have also made claims about Facebook CEO Mark Zuckerberg being involved in this scandal: 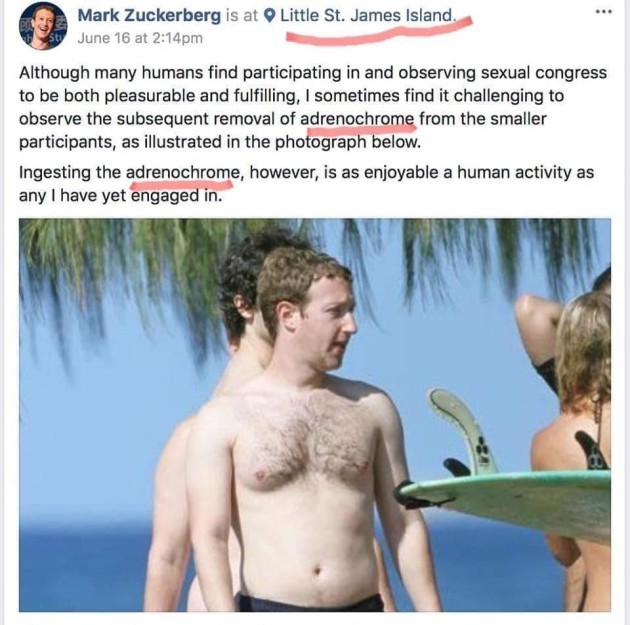 A spokesperson for Facebook confirmed to TheJournal.ie that this post “was not published on Mark Zuckerberg’s profile”.

Like most conspiracy theories, there is truth to small parts of the adrenochrome story.

Adrenochrome is not completely made-up – it is a chemical compound that is produced by the oxidation of adrenaline.

The SpinOff reported it can be used – though it does not appear to be widely used – to slow blood loss by promoting blood clotting in open wounds. It found most sellers state its source is synthetic.

Psychiatrists Abram Hoffer and Humphrey Osmond in the 1950s claimed that adrenochrome can form in the brain and may play a role in mental illnesses. They speculated that high doses of vitamin C and niacin could cure schizophrenia by reducing adrenochrome in the brain.

Other studies testing the use of megavitamin therapy to treat schozophrenia did not confirm any benefits of the treatment.

It features briefly in Hunter S Thompson’s Fear and Loathing in Las Vegas – both the book and the movie adaptation:

In the story, the character Dr Gonzo says there is only one source of the drug – the adrenaline glands from a living human body.

In the novel A Clockwork Orange, there is also a mention of ‘drencrom’ as an addition to the cocktail Moloko Plus.

There is no evidence that adrenochrome is widely used by celebrities – particularly those in Hollywood – as a hallucinogenic drug, or for any other purpose.

There is also no evidence that it is harvested from children who are part of a trafficking ring.

And there is no evidence of any link between adrenochrome and celebrities contracting the coronavirus.

There is a lot of false news and scaremongering being spread in Ireland at the moment about coronavirus. Here are some practical ways for you to assess whether the messages that you’re seeing – especially on WhatsApp – are true or not.

Look at where it’s coming from. Is it someone you know? Do they have a source for the information (e.g. the HSE website) or are they just saying that the information comes from someone they know? A lot of the false news being spread right now is from people claiming that messages from ‘a friend’ of theirs. Have a look yourself – do a quick Google search and see if the information is being reported elsewhere.

Secondly, get the whole story, not just a headline. A lot of these messages have got vague information (“all the doctors at this hospital are panicking”) and don’t mention specific details. This is often – but not always a sign – that it may not be accurate.

Finally, see how you feel after reading it. A lot of these false messages are designed to make people feel panicked. They’re deliberately manipulating your feelings to make you more likely to share it. If you feel panicked after reading something, check it out and see if it really is true.

TheJournal.ie’s FactCheck is a signatory to the International Fact-Checking Network’s Code of Principles. You can read it here. For information on how FactCheck works, what the verdicts mean, and how you can take part, check out our Reader’s Guide here. You can read about the team of editors and reporters who work on the factchecks here

Have you gotten a message on WhatsApp or Facebook or Twitter about coronavirus that you’re not sure about and want us to check it out? Message or mail us and we’ll look into debunking it. WhatsApp: 085 221 4696 or Email: [email protected]