The fake advertisement was shared on social media following protests in Dublin at the weekend.

A JOBS ADVERTISEMENT which purported to have been posted on behalf of Rise TD Paul Murphy looking to recruit “actors” to appear at protests is fake and has been photoshopped.

The false ad was shared on social media in the wake of anti-mask protests and a counter-demonstration in Dublin last week. Murphy has said he won’t be “intimidated about speaking out” by the post.

On Saturday, a number of protests were organised in Dublin city centre.

One of the groups formed an anti-restrictions, anti-mask protest that progressed to Kildare Street outside Leinster House.

During counter-demonstrations against the anti-mask group as it passed Leinster House, LGBT rights and Repeal the Eighth activist Izzy Kamikaze received a head injury. Gardaí intervened between two opposing groups of protesters.

Gardaí in Pearse Street have said they are now investigating this incident.

Murphy shared a photo of Izzy Kamikaze in the aftermath of the incident on Twitter on Saturday, and suggested that supporters of the far-right were at the centre of mobilising the protests.

This week, an image purporting to be a screengrab from a jobs website has been shared on social media. 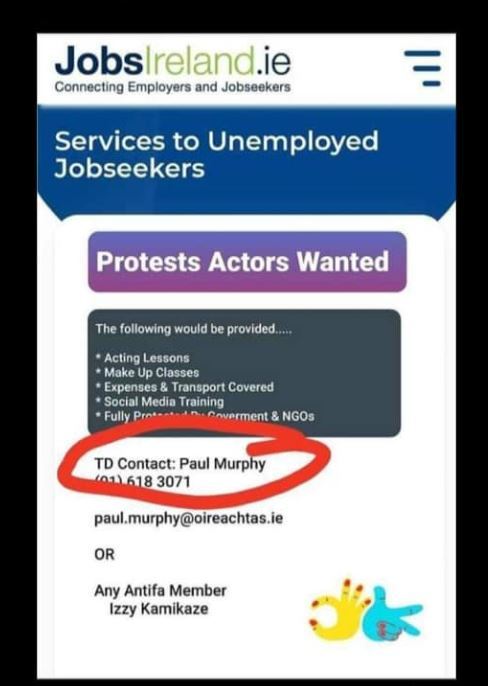 It says “protests actors wanted”, and says that acting lessons, make up classes and social media training would be provided. It also said that expenses and transport are covered and that the “actors” would be fully protected by the government and non-governmental organisations.

It says to contact Paul Murphy or “any antifa member” and also mentions Izzy Kamikaze.

One version of it on Facebook, which has more than 100 shares and comments, was posted by a user who has shared posts telling Irish people to “wake up” and “rise up”, as well as content claiming Covid-19 was “never a pandemic”. They have also claimed that Murphy is “recruiting for a terrorist organisation” in the post on Facebook.

Invoking the existence of so-called crisis actors – people paid to appear at staged events – is a common tactic in the spread of misinformation by the far-right, particularly in the US.

The most notable example of this is the Sandy Hook school massacre in Connecticut in 2012 where conspiracy theorists have claimed the incident was an orchestrated show performed by crisis actors.

False claims have been spread on social media about Saturday’s events, which include claims Izzy Kamikaze had not been attacked in the incident.

The post appears to suggest that the left-wing TD is recruiting people to appear at protests. This is not the case. The post was never put on a jobs website, and is a fake.

Expanding on this derision to TheJournal.ie, the Dublin South-West TD confirmed he didn’t post any such advert.

He said: “I’m well used to people trying to slander me or have a go.

“In reality [the posters] have shown their true colours – they are anti-worker, anti-trade union and anti-left, and are hiding behind false names and causes. I won’t be intimidated from speaking out about what their real agenda is.”

There is a lot of false news and scaremongering being spread in Ireland at the moment about coronavirus. Here are some practical ways for you to assess whether the messages that you’re seeing – especially on WhatsApp – are true or not.

Look at where it’s coming from. Is it someone you know? Do they have a source for the information (e.g. the HSE website) or are they just saying that the information comes from someone they know? A lot of the false news being spread right now is from people claiming that messages from ‘a friend’ of theirs. Have a look yourself – do a quick Google search and see if the information is being reported elsewhere.

Secondly, get the whole story, not just a headline. A lot of these messages have got vague information (“all the doctors at this hospital are panicking”) and don’t mention specific details. This is often – but not always a sign – that it may not be accurate.

Finally, see how you feel after reading it. A lot of these false messages are designed to make people feel panicked. They’re deliberately manipulating your feelings to make you more likely to share it. If you feel panicked after reading something, check it out and see if it really is true.

TheJournal.ie’s FactCheck is a signatory to the International Fact-Checking Network’s Code of Principles. You can read it here. For information on how FactCheck works, what the verdicts mean, and how you can take part, check out our Reader’s Guide here. You can read about the team of editors and reporters who work on the factchecks here

Have you gotten a message on WhatsApp or Facebook or Twitter about coronavirus that you’re not sure about and want us to check it out? Message or mail us and we’ll look into debunking it. WhatsApp: 085 221 4696 or Email: [email protected]