BORIS Johnson will announce his vision for reversing coronavirus job loses this morning – as the number of young Brits out of work his 3.6 million.

The PM will unveil a Lifetime Skills Guarantee that offers every adult without an A-level or equivalent qualification a free, fully funded college course.

You can watch the PM’s announcement here, live on this page, at 11.30am.

An extra £8million will be poured into digital skills “boot camps” across the country – designed to make the economy more flexible in future downturns.

Follow our coronavirus blog for the latest news and updates...

PENSIONER WITH HEALTH ISSUES TOLD NEAREST TEST IS 500 MILES AWAY

A 73-year-old with health issues was told his nearest drive-through coronavirus testing centre was 500 miles away from his Dorset home.

Stephen Feltham lives in Bournemouth on the south coast – but when he tried to book a test in Poole, just six miles away, he was told he’d have to travel to Perth in Scotland instead.

The type-two diabetic with high blood-pressure said he called 119 – the NHS number for testing – and discovered tests had run out.

You can read more here. 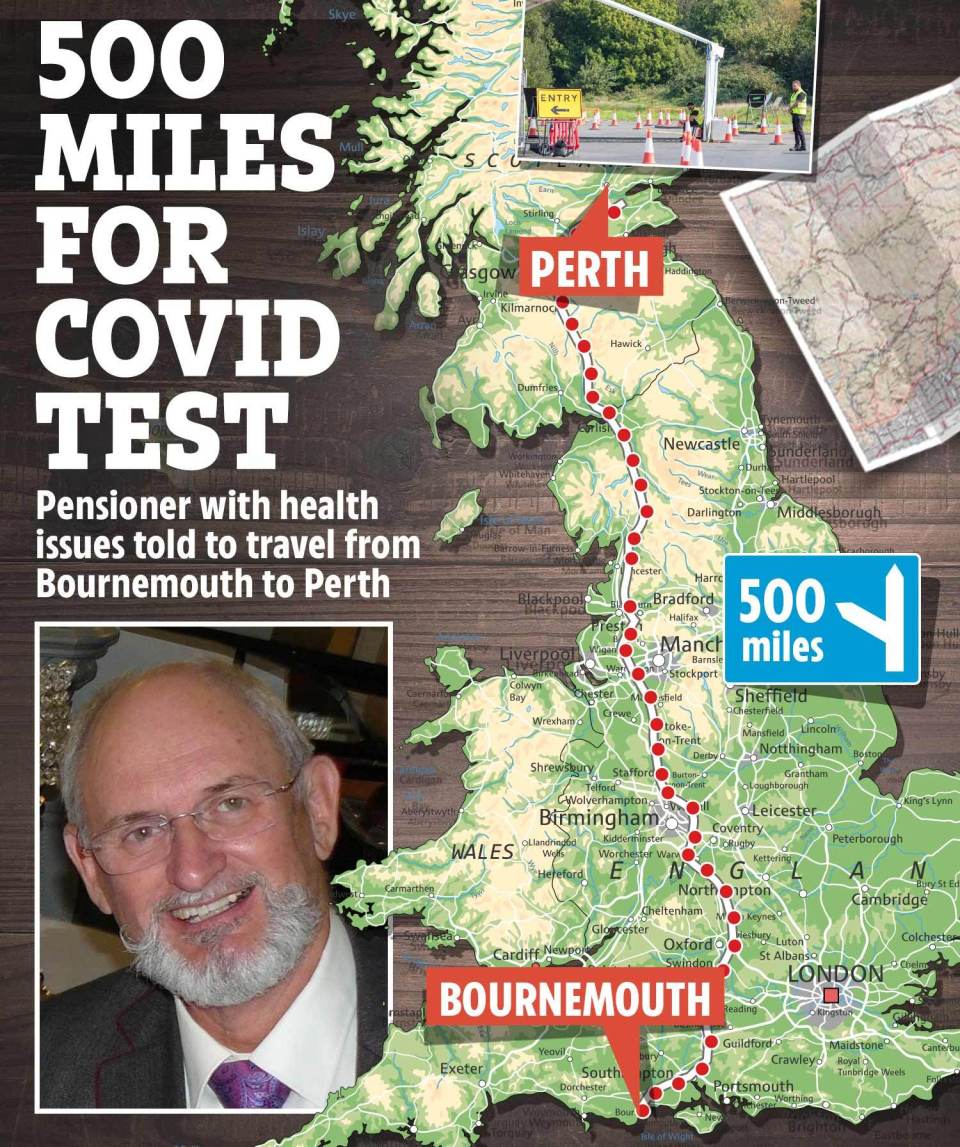 The Prime Minister caused chaos and confusion over the coronavirus rules today after he failed to say whether people could meet in a pub garden in the North East tomorrow.

He proved just how complicated the local lockdown rules are by tying himself in knots over the new laws – which will come into place in parts of England tomorrow after soaring cases.

In the North East, new rules mean you cannot meet people from different households in social settings indoors, including in pubs, restaurants and your home. You should also avoid socialising with other households outside. (1/2)
— Boris Johnson (@BorisJohnson) September 29, 2020

BORIS TO GIVE JOINT PRESS BRIEFING WITH WHITTY AND VALLANCE

The Prime Minister will give a rare joint coronavirus press conference tomorrow with Chris Whitty and Patrick Vallance as new infections have continued to soar.

Boris Johnson will deliver another update on the second wave now gripping Britain as fears have grown over even stricter national measures.

He gave a televised address last week as he announced 10pm curfew on pubs and other hospitality venues, alongside orders for office workers to work from home once again.

It is not expected that he will announced further national restrictions but he will address the skyrocketing infection numbers. 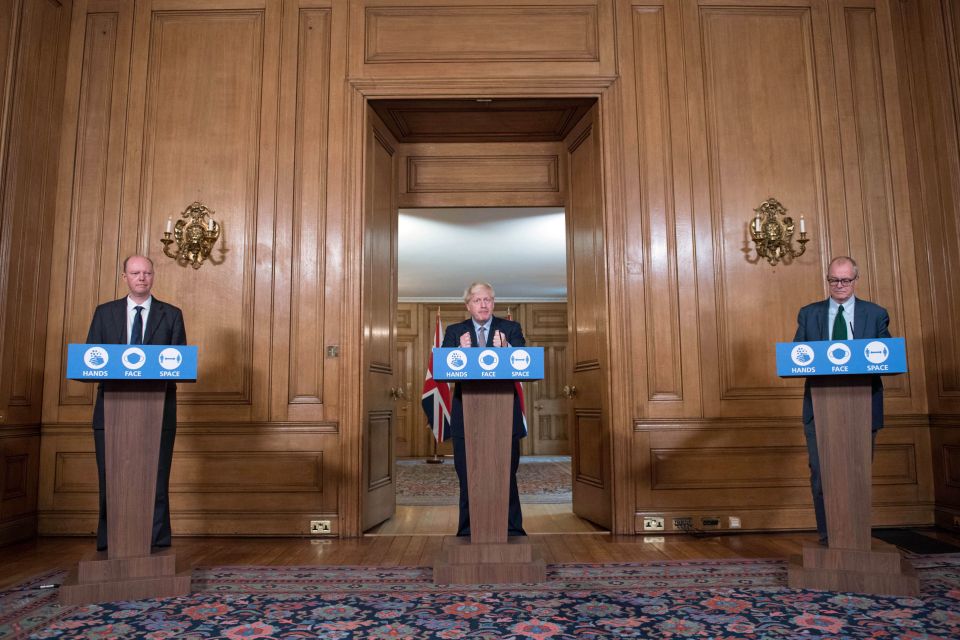 There have been a further 366 cases of Covid-19 in Wales, bringing the total number of confirmed cases in the country to 23,597.

Public Health Wales said three further deaths had been reported, with the total number of deaths since the beginning of the pandemic increasing to 1,615.

Two thirds of Wales’ population is now living under local lockdowns after new rules came into effect on Monday. 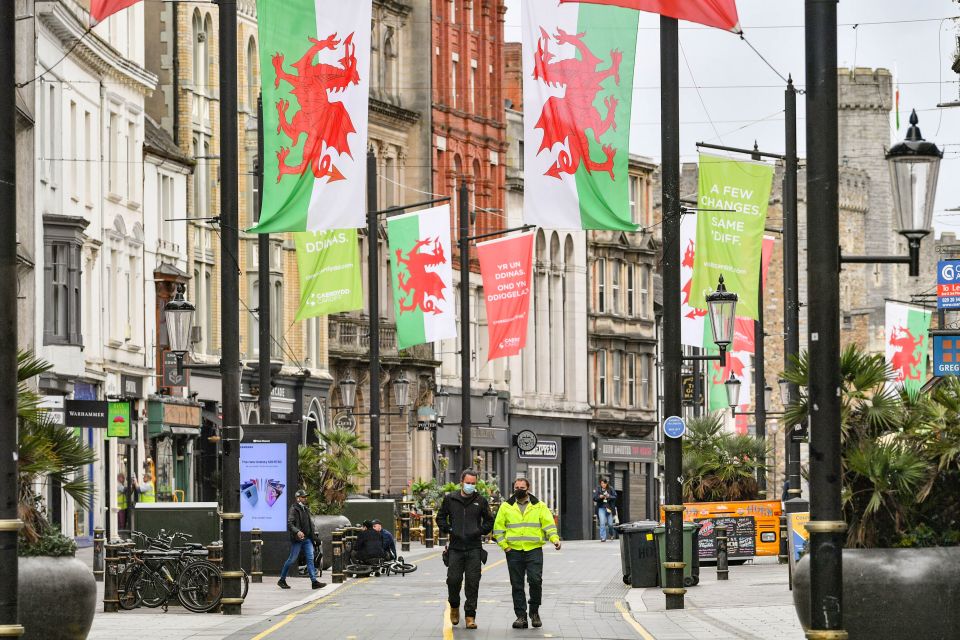 UNI STUDENTS CAN HAVE CHRISTMAS WITH FAMILY

There had been fears that local Covid-19 lockdowns that are already impacting students in large parts of the country would stop them from reuniting with family over the festive season.

“We are going to work with universities to make sure that all students are supported to return home safely and spend Christmas with their loved ones if they choose to do so,” he confirmed today.

“There may be a requirement for some students to self isolate at the end of term,” the politician added.

Popular baker Greggs will cut shop staff jobs and hours as it expects trading to remain below normal for the foreseeable future due to the Covid-19 pandemic.

Greggs, best known for its sausage rolls, steak bakes and vegan snacks, said on Tuesday it had launched a consultation with union and employee representatives.

“The dilemma here is about demand… if the customers aren’t there, there’s no point having the people there to serve them,” CEO Roger Whiteside told Reuters. 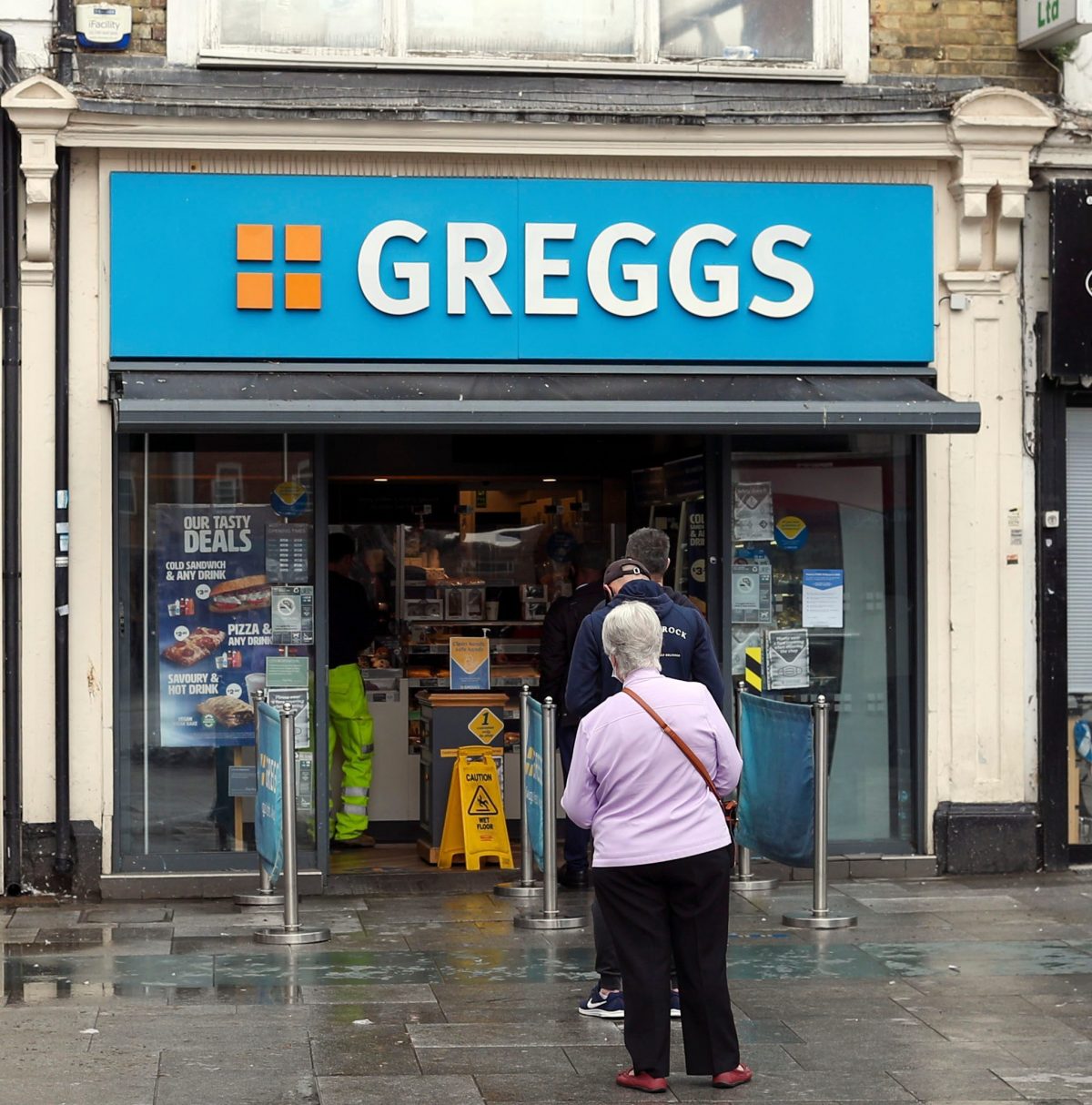 Nine-in-ten coronavirus patients reported side-effects such as fatigue, psychological after-effects and loss of smell and taste after they recovered from the disease, according to a preliminary study by South Korea.

Fatigue was the most common side-effect with 26.2% reporting this, followed by difficulty in concentration which had 24.6%, said Korea Disease Control and Prevention Agency (KDCA) official Kwon Jun-wook.

South Korea is also conducting a separate study with 16 medical organisations on potential complications of the disease through a detailed analysis involving CT scans on recovered patients next year, Kwon told reporters.

The research findings come as the global death toll from coronavirus passed one million on Tuesday.

ON THE SPOT COVID TEST TO BE ROLLED OUT

An on-the-spot coronavirus test that gives results in 15 to 30 minutes is set to be rolled out globally.

The rapid kits work in a similar way to a pregnancy test and display two blue lines when testing positive for Covid-19.

They work by taking a nasal swab and inserting the sample into a cartridge that looks for antigens – or proteins found on the surface of the virus.

EDUCATION SECRETARY SAYS GOVERNMENT WILL MAKE SURE STUDENTS ARE SUPPORTED

Gavin Williamson said the Government will work with universities to make sure all students are supported to return home for Christmas if they choose to do so.

He said: “I know there has been some anxiety about the impact safety measures will have on the Christmas holidays.

“Students are important members of the communities that they choose to study in. We expect them to follow the same guidance as those same local communities.

“We are going to work with universities to make sure that all students are supported to return home safely and spend Christmas with their loved ones if they choose to do so.”

806 TEST POSITIVE FOR COVID IN SCOTLAND

A total of 806 people have tested positive for coronavirus in Scotland in the past 24 hours, Nicola Sturgeon said.

Speaking at the Scottish Government’s coronavirus briefing, the First Minister said 28,604 people have now tested positive in Scotland, up from 27,798 on Monday.

This is 11.5 per cent of newly-tested individuals, up from 6.9 per cent the previous day.

She said the daily figure of new cases includes “quite a high number of results” from samples taken on Friday and Saturday which may have been expected to be reported on Monday. 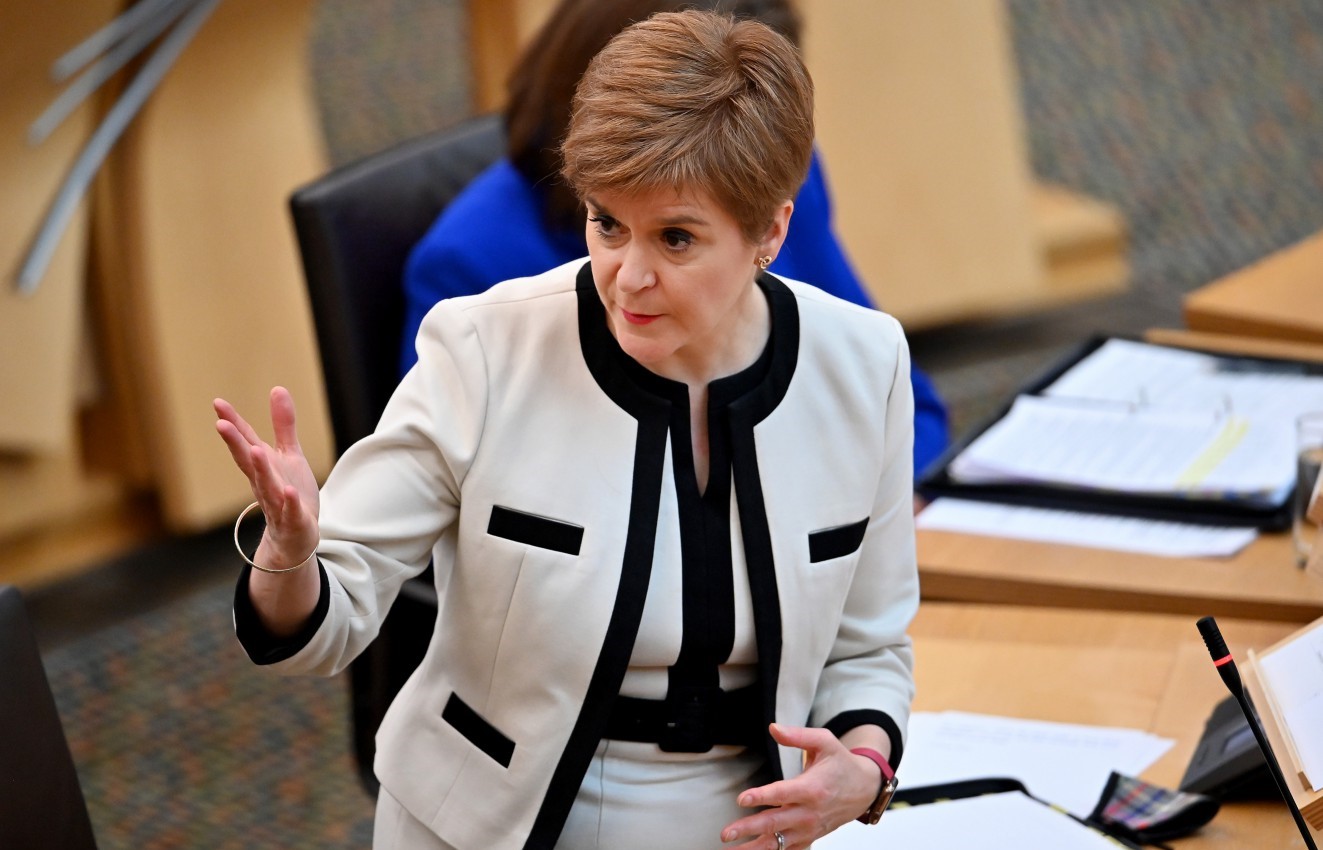 MPS TOLD THEY WILL HAVE CHANCE TO DEBATE RESTRICTIONS

Boris Johnson has told MPs they will have the chance to debate coronavirus restrictions amid a mounting Tory revolt.

Asked about Big Brother-esque criticism, the Prime Minister said: “Nobody wants to do these kinds of things. Nobody in their right mind wants to stop people singing and dancing in pubs or enjoying themselves in the normal way.

“But I’m afraid we’re no longer in the emergency of March but we’re still in a serious situation.”

He said the virus needs to be kept down by following the guidance for when medical breakthroughs will deliver “long term liberation”. 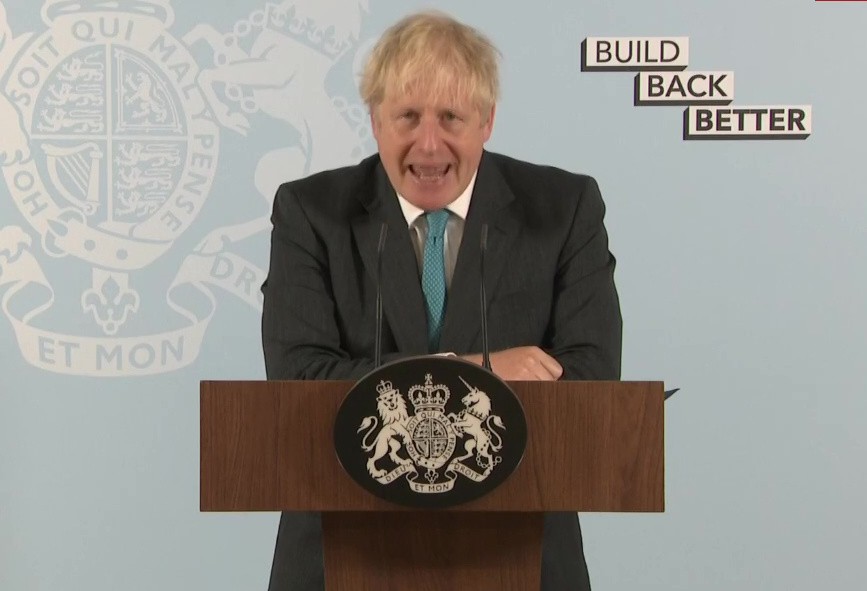 WHAT DID BORIS ANNOUNCE TODAY?

Boris Johnson said: “I’m afraid that the hospitality sector is an obvious place of transmission of coronavirus.”

He also added that these restrictions are not the same as the lockdown we faced in March.

BORIS SAYS HE IS ‘FITTER THAN BEFORE HAVING COVID’

Asked what the Government is doing to help those with so-called long covid: “A huge amount of work is being done by our doctors into that phenomenon.

“We need the NHS to deal with all the existing backlog, the cardiac issues, the cancer.”

He also said: “I can tell you I am fitter than I was before.

“I am fitter than a butcher’s dog, thanks to losing weight.

The Prime Minister said: “Nobody in their right mind wants to stop people singing and dancing in pubs.

“But I’m afraid we are still in a serious situation.

“Of course I strongly believe there are all sorts of reasons to be hopeful and optimistic.”

Boris Johnson said of students stuck in lockdown at universities: “I hope that they can continue to get value with the courses they are being given.”

‘END DISTINCTION BETWEEN PRACTICAL AND ACADEMIC’

The Prime Minister has said now is time to end the distinction between practical and academic training.

He said: “Now is the time to fix a problem which has plagued this country for decades”.

Boris Johnson has said the new Lifetime Skills Guarantee will make the country richer and fairer.

He said the new schemes will ensure “everyone has the chance to train and retrain.”

Failures in technical education have held the country back, the Prime Minister said today.

Boris Johnson has announced new funding for training courses for adults who need to retrain.

Anyone will be able to apply for the scheme – even if they left school without A-levels.

Boris Johnson has announced he is expanding “digital bootcamps” to four new locations where anyone can learn new IT skills.

Boris Johnson has said every student will be entitled to four years of funding for further education.

This “nimbleness” will allow students to study a technical course and then go on to study at university later, if they wanted to.

Older people will also be able to study part time in an easier way.

The Prime Minister has announced a change in funding model to allow colleges to access the same funding models as universities.

He said: “Now is the time to end this bogus distinction between FE and HE.”

FE colleges will be given access to the main student finance system for a select group of further education courses.

Boris has announced new apprenticeships which can be moved from employer to employer after a contract ends.

‘WE NEED TO INVEST IN SKILLS’

Boris has said he will invest in Further Education to level out the opportunities across the country.