IN his first No 10 press conference since July, Boris Johnson addressed the nation to announce new measures to tackle coronavirus.

The Government slashed the number of people who are allowed to gather indoors or out to six after the number of coronavirus cases soared.

So @BorisJohnson @MattHancock when deaths have thankfully plummeted, why are you heading towards tighter lockdown with extra Covid Marshalls to fine your turbulent population ? Ludicrous & absurd, bordering on dictatorship. The public will increasingly rebel against this. pic.twitter.com/EbFk0MTUOG

Stop speaking bloody French you buffoon @BorisJohnson.
We can barely understand you in English.

Half a year in, and @BorisJohnson says testing is key to defeating the virus, like this is some kind of major discovery.

In an interview with Sky, Sir Keir said: “The Government has now acknowledged that their poor communication was part of the problem.”

“I urge everybody to try and comply with the rules and not to find ways around them and there’s nothing between the Labour Party and the Government on this.

“We all want people to follow those rules,” he added.

KUENSSBERG SAYS ‘WE COULD BE IN THIS FOR THE LONG HAUL’

Reacting on Twitter, the BBC’s Laura Kussenberg said: “This is a big tightening of the limits on people’s lives in England after weeks of the rules being relaxed, and it was clear from Chris Whitty, we could be in this for another long haul.”

A snap YouGov poll suggests there is strong public support for the government’s decision to ban people from socialising in groups of more than six in most circumstances.

Out of the 3906 adults surveyed, 45% said they strongly supported the new measure.

Only 7% said they disagreed with the rule.

“I hope everyone gets the message,” the Prime Minister says in his closing remarks, as the first coronavirus briefing in some time draws to a close.

“It’s very simple, it remains hand, face, make space, get a test if you have symptoms. But enforce now – observe and enforce – that rule of six, outside or inside, and that’s the way I think we’ll beat the current outbreak.”

‘A DOSE OF REALISM’

While Boris is generally optimistic he offered a ‘dose of realism’, says Sky’s Beth Rigby.

He didn’t cancel Christmas but he did not promise that Christmas would be able to continue as normal.

Summarising, he says the whole objective of the “rule of six” is to allow the country to keep going forward.

He says most pupils going back to school is evidence that the country is moving forward.

ITV’S Paul Brand has offered a succinct summary of the press conference.

Writing on Twitter, he said: “Don’t meet in groups of more than 6. If you do, you could be arrested & fined.

“No promise this will be over by Christmas.

“Way out of it is mass testing with 20-90 min tests So much of this now hangs on testing, with CSA suggesting no vaccine til next year”

PIERS MORGAN COMPLAINS OF LACK OF CLARITY OF MESSAGE

Boris Johnson doesn’t know what the hell he’s doing or saying.
Rather worrying traits in a Prime Minister during a pandemic.

“IT BREAKS MY HEART”

Boris says it breaks his heart that young people are unable to see their grandparents in the same way.

But he says that everyone must take responsibility for the spread of the virus, even if they are not vulnerable.

He reminds people that young people are capable of passing the virus to older people.

He said: “It’s not just the risk to yourself alas but at any age you can be a vehicle or a vector for the disease”.

He added: “Young people are overwhelmingly getting it – but they are more than capable of giving it to the older generation.

“I’d love to show you evidence tat the disease has become less dangerous… but we’ve got to save lives.”

EVERYBODY NEEDS TO WORK TOGETHER, SAYS BORIS

Responding to Beth Rigby from Sky, Boris says that it is too early to say whether Christmas will be normal.

He said the Government are hopeful about “the rule of six” and he is also hoping the “moonshot” approach will work.

In order for sufficient progress to be made, Boris insists that everybody “must work together”.

CHRISTMAS COULD BE SAVED BY PREGNANCY-STYLE TESTING, SAYS BORIS

Asked by Robert Peston whether Christmas is cancelled, Johnson says he is “still hopeful” that Britons can get “some aspects” of life back to normal by Christmas through a “moonshot of daily testing – everybody gets a pregnancy style test in the morning”.

“IT’S GOING TO BE DIFFICULT”

Sir Chris Whitty admits that the next few months will be difficult as the virus is respiratory.

While Boris Johnson says that Christmas is not cancelled and he is still hopeful that we could get some aspects of our lives back to normal by Christmas.

“Why should the public trust you if you admit the messaging has been confusing?”, the BBC’s Laura Kuenssberg asks.

Boris says he hopes today to “clarify” and “intensify” the message and hopes everyone will understand the “rule of six”.

The objective is to prevent a “wholesale national lockdown,” Boris says.

WHAT WE KNOW SO FAR

Social premises will be legally required to request test and trace information from customers and keep those details for 21 days.

8,396 new Covid-19 cases have been reported since Sunday in the UK.

The highest infection rate in the UK is now among 20 to 29 year olds.

The Prime Minister says plans to open concert venues will be reviewed.

Sir Patrick Vallance said the pausing of the Oxford vaccine is not an unusual occurrence.

The public should expect other trials to be paused, he said.

He said: “It is wrong to just jump over these stages”

Vallance said people can remain optimistic about the possibility of vaccinations next year.

Boris said restrictions will be looked at constantly – but didn’t mention whether the Government hopes to have them lifted by Christmas. 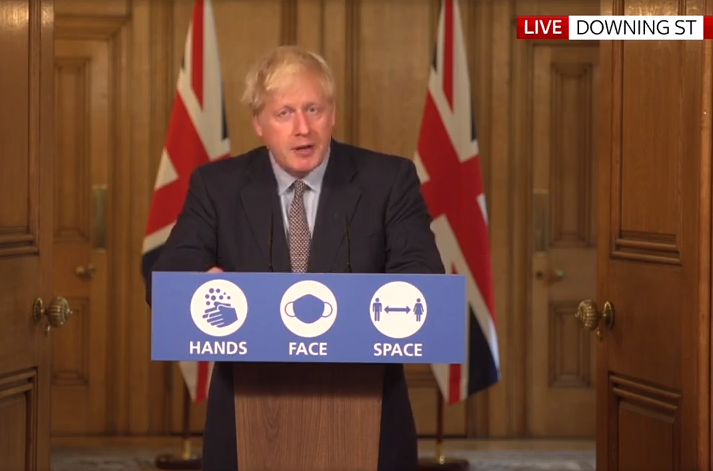 DON’T TAKE A TEST IF YOU DON’T NEED IT

Boris warns people should not take a test unless they have symptoms.

He says people who do so “could be taking away a test” from someone who needs it.

In the future tests will look for people who don’t have COVID so these people can behave normally, without the need for social distancing.

He said: “Workplaces could be opened up to all those who test negative in the morning.”

The Government will pilot this approach in Salford next month, with indoor and outdoor venues.

Johnson says his priority is to keep schools and colleges open.

He says they should only be closed as a last resort.

The health risks from closing them would be far, far greater, he says.

He says they should wash hands and make space, for the sake of their grandparents, and they should not gather in groups of more than six, he says.

Boris Johnson’s lockdown roadmap initially saw November 1 as the first date that social distancing could be lifted, but it is understood he wants to review the plan for theatres and sports events.

The Prime Minister says “To beat the virus everyone should limit social contact as much as possible.”

Premises and venues will be legally required to request the contact details of a member of each party to assist track and trace.

There will also be £100 fines for everybody meeting in groups of more than six.

Boris says if you meet in groups of more than six from Monday, you will be “breaking the law.”

This single measures places the existing ban of gatherings of more than 30.

He says he wishes he didn’t have to take this step.

The rule of six will be “under constant review”.